In a battle among the nation’s best, the Blinn Buccaneers proved their dominance.

“The energy from the team flowing tonight, from the bench to the players on the court, was awesome,” freshman Trinity Alualu said. “We were all hyped up.” 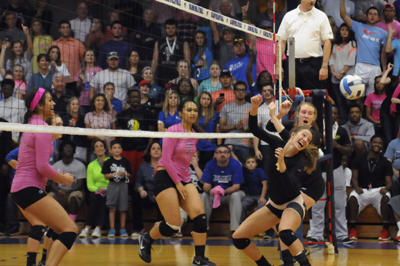 Trinity Alualu rips a shot past the Tyler defense.

It was a tense atmosphere from the opening serve in the P.E. Building, but the Bucs helped calm the nerves with dominant wins in the first two sets.

The Lady Apaches were going to make a match win anything but easy.

The Bucs’ defense and front line held the Tyler offense out of any kind of rhythm in the opening sets. The defense, led by Alyssa LaMont’s 15 digs and Rebecca Reeve’s seven, mixed with the front line that combined for six blocks, kept the Tyler hitters frustrated and out of sync.

“We manipulated their serve receive and they struggled,” Blinn coach Erin Mellinger said.

The Lady Apaches, though, began to find some success in the third set when they took a 15-13 lead, their largest lead of the match. While it appeared a small momentum swing swung in Tyler’s favor, Blinn never let the Lady Apaches build more than a two-point lead.

Then, just as quickly as Tyler benefitted from that swing to take a 22-20 lead, Blinn snatched it right back. 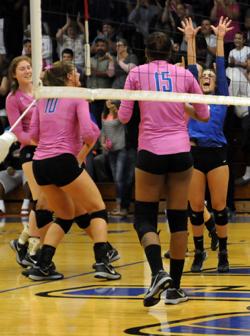 A block by Alualu and Kariana Castanon-Hill made it 22-21. Then LaMont, a 5-foot-2 freshman, made the play of the night that all but sealed the match.

After her serve was sent back to Blinn’s side of the court, LaMont made a diving play to an open hole on the left side of the court, which sophomore setter Crystal Young was able to get an arm on to set up Alualu, who planted the ball for a kill.

“That was incredible,” Mellinger said. “That was a huge dig. We said before the third set we needed the defense to pick up, and that was a big boost at that point in the game.”

Following a Tyler score, Blinn rallied, and Alualu, who has struggled with her consistency in recent weeks, placed a soft lob over the Lady Apaches’ front line for match point.

“All I could think was we have to end the game,” said Alualu, who finished with seven kills and six digs. “We’ve been working for this throughout practice all week.”

With a win on the road Friday against Hill College, the Buccaneers will move back into the top spot in the NJCAA rankings, a spot they held five consecutive weeks earlier in the season.

Mellinger knows that with the No. 1 ranking comes a big target on the Buccaneers’ backs.

“But that’s right where the players want to be,” she said.

Before the match, the Buccaneers recognized Shiela Villarreal of Hempstead in honor of Dig Pink Night to support Breast Cancer Awareness month. Villarreal is a long-time friend of the Blinn Athletic Department and is currently undergoing treatment for breast cancer.