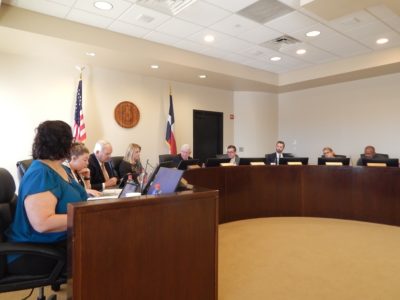 The decision to potentially name an airport liaison comes after the dissolution of the city’s Airport Advisory Board in November.  In place of the board, staff members are proposing a single council-appointed liaison and ad-hoc committees formed as needed.

The city received eight applications for the liaison position and interviewed three candidates with a panel consisting of Councilmembers Shannan Canales, Leah Cook and Adonna Saunders, City Manager Carolyn Miller, Development Services Director Stephanie Doland and J. Shane Howard of Burditt Consulting.  According to the agenda packet, the interview panel is recommending Joseph Randy Hodge to serve as liaison beginning this month and ending December 2024.  Other applicants who were not selected will be considered to serve on the business and facility ad-hoc committees, as well as the planning advisory committee to the upcoming airport master plan project.

The responsibilities of airport liaison will include serving as the sounding board between airport stakeholders and the city, advocating for additional airport resources or improvements through the city or grant funding, reporting violations of airport minimum standards or Federal Aviation Administration standards, serving as the committee chair for ad-hoc working groups and providing recommendations from those groups to the city council for final approval.

According to the cover letter submitted by Hodge to the city for the position, he and his family moved to Brenham in 2016 and became a tenant at the airport in 2017.  He received a Master of Business Administration degree in finance and accounting from Texas Christian University, and spent 12 years in airline management and eight years as the secretary/treasurer of a pilot labor union.  He has been a member of the general aviation community since 1976.

In other business, the council will receive a presentation of the residential needs assessment prepared by Community Development Strategies.  Brenham Economic Development Director Susan Cates will review the assessment, which was conducted last year, and point out areas of significant interest.

Also at Thursday’s meeting, the council will:

The council will meet Thursday at 1 p.m. at Brenham City Hall.

Click here to read the agenda packet for Thursday's meeting.