The Blinn College-Brenham Campus is turning to state-of-the-art technology and an old-school presentation for its 2020-21 theatre arts season.

“On the Air: Old-Time Radio Theatre” will combine video and audio in a series of online performances modeled after radio plays popular in the 1940s and shared on the Blinn website.

Shows include “The Screaming Woman,” “Miracle on 34th Street,” “Popeye and the Gang at the Zoo,” and “Completely Hollywood.” 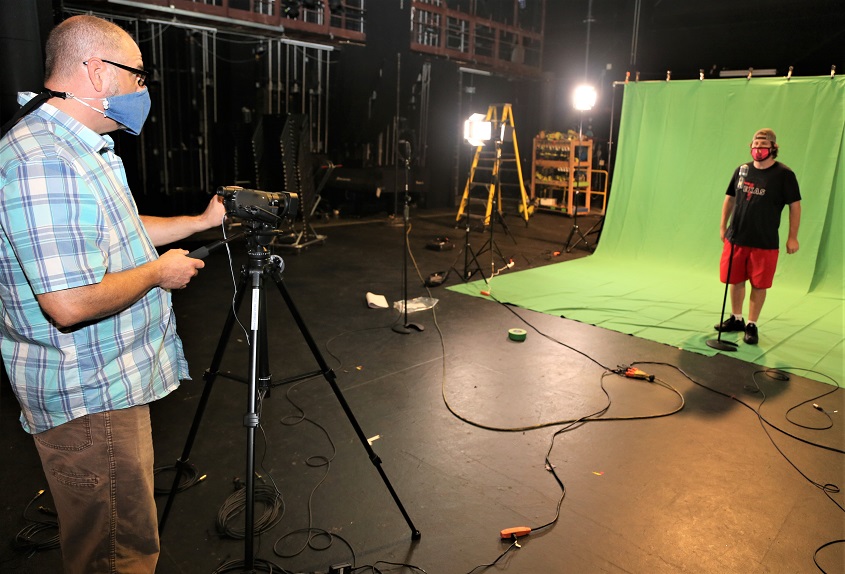 Free virtual tickets are available for every show except “Completely Hollywood” at www.blinn.edu/boxoffice. Links to the videos will be emailed to those who sign up by Oct. 23 for “The Screaming Woman,” by Nov. 20 for “Miracle on 34th Street,” and by Feb. 26, 2021 for “Popeye and the Gang at the Zoo.”

Tickets will be required for “Completely Hollywood,” at $5 each plus a convenience fee. Those will be available beginning April 1, 2021. Performances of that show will begin streaming April 29 and 30 at 7 p.m., and May 1 and 2 at 2 p.m.

“We thought that the plays would be a nice reflection on the past, while at the same time enable us to adhere to social distancing in each presentation,” Nies said.

In the radio play format, the actors will not need to perform face-to-face and will not share microphones, costumes, or props.

Blinn purchased two high-resolution Sony AX100 cameras to film each actor alone on stage. Green screen technology will be used to blend each actor’s performance into a single video. Dialogue and sound effects will be recorded for the “radio” portion of each performance.

“When we remove the green screen from the individual videos, we can layer or composite the different videos together and make it look as though the actors are standing next to each other,” said Kevin Patrick. “The person at the microphone is on camera, in costume, acting out the entire show. We’ll film that actor, who is on stage by themselves. Then we’ll film the next person.”

One of the biggest challenges – in addition to editing all of the actors into a single video – will be sound effects, Patrick added. An organ will be used to provide a 1940s feel. Other sound effects will come from gravel, a typewriter, and a specially-made door to produce creaking sounds.

Theatre Department students are doing all the acting, stage managing, and sound effects, said Patrick. They also are helping with special lighting needed for the high-definition cameras, he added.

“The Screaming Woman” is based on a short story by science fiction author Ray Bradbury.

“Miracle on 34th Street” is a beloved Christmas classic based on the 1947 film.

“Popeye and Gang at the Zoo” is based on the popular cartoon characters introduced to audiences in 1929.

“Completely Hollywood” is a compilation of clichés from 186 classic movies.

All plays and dates are subject to change. For more information, visit www.blinn.edu/boxoffice.