The Blinn Board of Trustees unanimously approved 2019’s property tax rate at its meeting Tuesday. 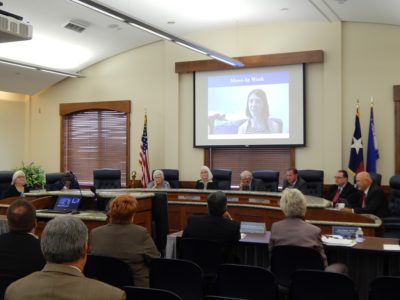 The rate is expected to generate $2.1 million in tax revenue to support Brenham campus maintenance and operations. It equates to about $8.75 in monthly taxes on the average Washington County home, valued at $199,906.

Blinn hosted a pair of public hearings on September 3rd and September 12th regarding the tax rate, neither of which drew comment from the public.

Vice Chancellor Richard Cervantes said Blinn’s tax rate remains the lowest of any taxing entity in Washington County, as well as any of the other community colleges across the state.

However, Cervantes said the College has to rely more on revenue from tuition and fees, as a result of the low rate.

While Blinn serves a 13-county area, only Washington County resides within the College’s taxing district. Property tax revenue covers roughly a third of the Brenham campus’s maintenance and operations costs, while Brenham campus student tuition and fees cover the other two-thirds.  By law, property tax revenue cannot be used to fund campuses outside of the taxing district.

In other action, the board authorized the College to negotiate a temporary agreement with the Texas Historical Commission (THC), regarding the operation of the Star of the Republic Museum. Under House Bill 1422, Washington-on-the-Brazos State Historic Site was transferred to the THC earlier this month.

Oversight of the Star of the Republic Museum will transfer to the THC at the start of next year, following the passage of Senate Bill 2309. Blinn will continue to serve as the educational partner at the museum, and will continue to own the museum, the land where it is located, and the museum’s artifacts.

To begin the meeting, the board heard a public comment from Randy Bennett, a relatively new resident of Brenham. Bennett, who said he is both a strong advocate and product of the Texas junior college system, said he recently signed up for a single fall class at Blinn.  He said he was surprised when he saw “what was a very reasonable tuition fee expand to nearly triple” due to general fees and activity fees.

Bennett asked the College to consider the possibility of implementing single-class fees to better service working or senior citizen students. He said he has no issue with the cost of tuition, but some of the fees “distort the enrollment for a single class”.  As the item was brought up in public comment, no action was taken.