Blue Bell Ice Cream is recognized for a variety of flavors, but one in particular is celebrating a special milestone in 2019. 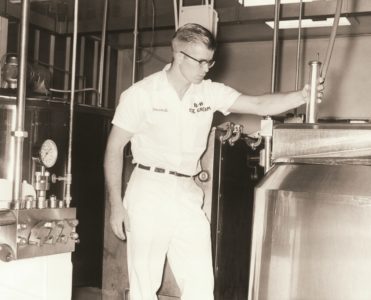 The flavor, known for its distinct hand-cranked taste, made its debut in 1969.  It was created by former Blue Bell CEO and President Howard Kruse.

Only the minimum of 5,000 half gallons were ordered for initial production.  Since then, it has become one of the most popular flavors of ice cream in the country.  It’s even been enjoyed by astronauts in space.

The flavor has had three carton designs with minor changes throughout the years.  The original design was blue with a bell.  In 1978, the carton changed to a pale yellow with the cow and girl logo circling the bottom.

The various designs of Homemade Vanilla through the years.
(courtesy Blue Bell)

The current design debuted in 1989, but only in the pint size, featuring a much larger cow and girl logo on a tan carton.  The half gallon followed in 1992.

Homemade Vanilla is available in half gallons, pints, and three ounce cups.