An estimated 4000 people took time to Think Pink in Washington County, on Thursday that they put on the best pink outfits for work and school.

That was one of the many things were learned about the awareness, prevention and cure of breast cancer at the annual Bosom Buddies Think Pink Business After Hours yesterday (Thursday) at the Giddings Hasskarl Imaging Center of the Brenham Clinic.

The Bosom Buddies, the survivors of breast cancer encouraged business people, workers, school students and everyone else were to wear pink during the Think Pink Thursday.

One of the Bosom Buddies, Tina Newman of Brenham told the gathering about her year long struggle with breast cancer and how she was cured with the effective use of imaging technology at the Giddings Hasskarl Center. 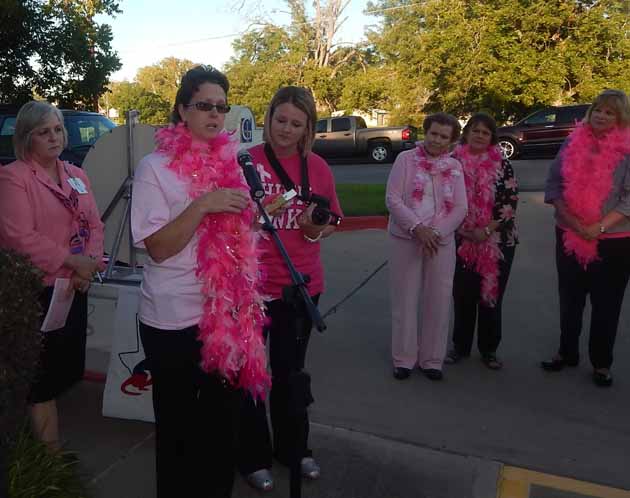 Tina Newman tells of her victory over breast cancer.

Other speakers, such as Brenham Clinic Administrator Grace Slattery told the group that one out of every women get a diagnosed with breast cancer each year.  Dr. William Loesch told the gathering that the survival rate of women with breast cancer diagnosis has increased dramatically since the improvement of mammography technology.  He said the detection is coming so much earlier now, and increasing the survival rate.

All the speakers urged women to get a mammography.