The Brenham City Council will meet tomorrow (Thursday) to give notice of intent to issue just under $5.7 million in debt. 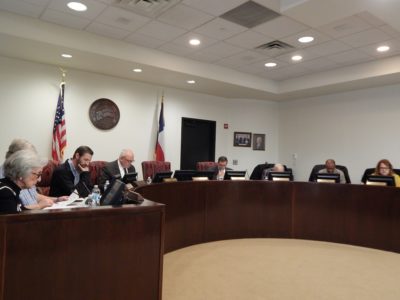 The council will give notice of its plans to issue $5.69 million in certificates of obligation and declare an effective date.

Chief Financial Officer Carolyn Miller said general government projects make up $3.5 million of the $5.69 million, including $625,000 for street reconstruction and rebuilding, and $2.88 million for street and drainage improvements.

The wastewater utility improvements of $1.42 million include a new regional lift station to support the Baker Katz retail development project.

The majority of the water utility improvements of $765,000 are for the Atlow Storage Tower rehab project, and the city’s portion of the May 2016 flooding event.

Miller said the city’s financial adviser, Garry Kimball, will handle the securing of pricing for the certificates of obligation, and bring the item back to council for action at its meeting on January 16, 2020.

The council will also hold public hearing and give first reading of an ordinance implementing a Drainage Utility System and Drainage Utility Charge. City officials say the charge will establish a dedicated and sustainable funding source to provide for the operation, improvement, and maintenance of the city’s drainage infrastructure.

Also in session, the council will:

The council will meet tomorrow afternoon at 1 p.m., at Brenham City Hall.