The Brenham City Council will take up budget talks and discuss an advancing line of credit for a water line repair project at Lake Somerville at a pair of meetings Thursday. 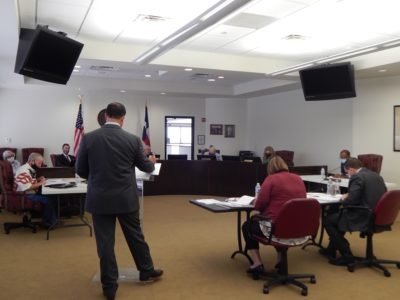 The council will first hold a special meeting from 9 a.m. to noon to go over the proposed 2020-21 Fiscal Year budget, before convening again at 1 p.m. for its regular meeting.

At the second meeting, councilmembers will consider a $5 million advancing line of credit from Bank of Brenham for interim financing for the raw water intake repair project at Lake Somerville.  The infrastructure sustained significant damage during the May 2016 flooding event.

After a lengthy procurement, review, and approval process, the city on February 13th received a letter from FEMA in support of the competitive bid process and the higher competitive bid amounts compared to the engineer’s estimate of probable costs.  On February 20th, the city awarded the construction bid to Lindsey Construction for $4,999,991.

The city is also awaiting approval from FEMA for a cost increase from the amended subgrant amount of $1.17 million to the original bid award.  The city is responsible for 25 percent of the final construction cost.

The loan from Bank of Brenham, which is being set up as an advancing line of credit for one year, will carry an interest rate of 2.6 percent with interest payable monthly.  If necessary, the bank is willing to renew the loan for an additional one year period, subject to satisfactory performance on the initial loan over the next year.

Also at Thursday’s regular meeting, the council will consider: