The Brenham City Council will continue the annexation conversation at its meeting Thursday. 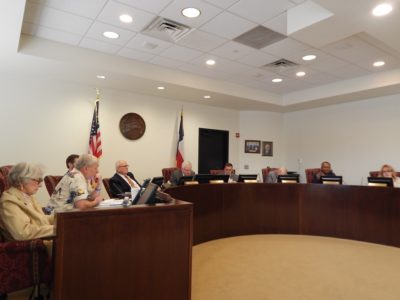 A public hearing will allow citizens to ask questions and gather information on the city’s proposed annexation of around 240 acres of land. Residents will also be able to hear from city officials as they explain the service plans for each of the areas proposed for annexation.

The city is currently considering 44 acres in the Southwest Industrial Park, bounded by Industrial Boulevard, FM 332, and FM 389; 6/10ths of an acre at Scenic Estates, along the west side of Old Masonic Road; and just under 195 acres on the east side of Farmers Road between FM 389 and Old Mill Creek Road, and the north side of Old Mill Creek Road between the current city limit line and Jackson Creek.

The city held two town hall meetings in October regarding the annexation; both were well attended. In her memo for the city council, City Secretary Jeana Bellinger said the consensus of the two meetings was that the citizens living in the roughly 195-acre tract “do not wish to be annexed by the city”. She said these residents “plan to submit a petition to try and stop the annexation of their property”.

Bellinger said city staff have also been looking at cost estimates for the 195-acre tract, concerning costs for services like utility infrastructure, street improvements, and fire suppression.  At this time, those cost estimates have not been finalized.

Staff are recommending the city move forward with annexing the two tracts of land other than the 195-acre tract, which would be postponed so city officials can properly evaluate costs.  The item is limited to public hearing, so no action can be taken.

The council will meet Thursday afternoon at 1 p.m., at Brenham City Hall.