A Brenham Police Department K9 Unit is hanging up the badge. 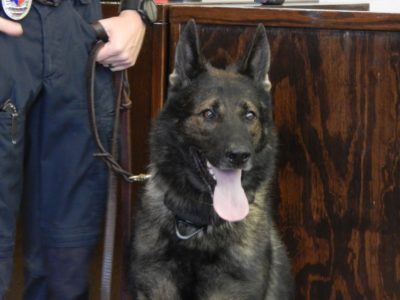 K9 Ronny is retiring after serving with the Brenham Police Department since September of 2012.

Since 2012, K9 Ronny was deployed 255 times to assist officers with narcotics detection and the capture of wanted felons.  His efforts helped lead to 143 arrests.  He also participated in several events with children at schools and other organizations.

K9 Ronny was granted to the police department by the non-profit K9s4COPs.  He was initially paired with Officer Seth Klehm in 2012, and with Officer Hunter Andras in 2015.

K9 Ronny was recognized for his service at Thursday’s Brenham City Council meeting.  Amanda Klehm, wife of Seth, thanked K9 Ronny for all the memories on the job and at home.

Officer Klehm thanked the Brenham Veterinary Hospital for taking care of him and fellow K9s over the years, as well as the Brenham Police Academy Alumni Association for their help in kicking off Brenham’s K9 program and providing continued funding.