Lete Phillips isn’t joking when she says she has kids all around the world.

Phillips, who owns and operates a fitness studio in Brenham, for 16 years has welcomed Blinn College-Brenham Campus student athletes from foreign countries into her home only a few blocks from the campus.

It began with a phone call from former volleyball coach Dave Rehr, who had signed a player from Brazil.

Rehr was hopeful that Phillips, also a native of Brazil, could help ease Daniels’ transition to a foreign land.

“So I went to help out,” Phillips said. “That’s when everything started, because of Sabrina.” 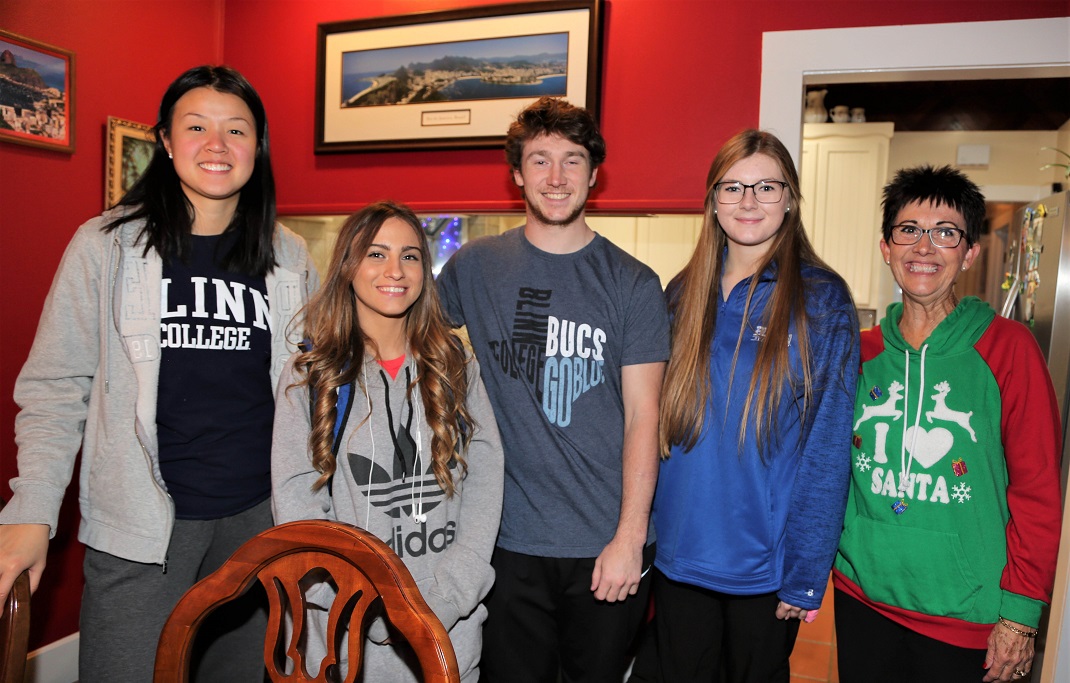 Phillips knows a little bit about moving to a foreign country; she came to the United States in 1976 to take part in a three-month international college students program at the University of Texas at Austin. There she met her husband, KP Phillips.

She has welcomed her role as an unofficial “sponsor” for international athletes at Blinn, helping fill a void for students far from home and away from loved ones. Through the years, she has been there for students from places like Germany, Italy, Russia, South Africa, Australia, Mozambique, and of course, her native Brazil.

“They miss their mommas. They miss somebody they can sit and talk with, about boys, what’s going on in school,” said Phillips, who recently welcomed her sixth grandchild. “I guess I just love being a mama and they’re just young kids. They have a goal. They want to continue playing volleyball or whatever, leave Blinn with a degree. They’re focused on that.”

Having a surrogate family is particularly important during times like holidays, she added. Many student athletes can’t make the long, expensive trip back home, and it provides peace of mind for the students’ parents.

One former foreign student athlete who found a special place in Phillips’ heart was Paulo Noronha, a distance runner from Mozambique who was a member of Blinn’s track team in the 1990s.

“I was out in the front yard watering the plants and watching the runners go by. Paulo stopped when he saw the Brazilian flag in front of my house,” said Phillips. “I said hi, and he said in Portuguese (Brazil’s native language), ‘Are you from Brazil?’ I said, ‘Yes, I speak Portuguese.’

“There was a moment that we bonded. In some ways, we adopted him. After graduating (from Blinn), he was going to return to Africa but was advised by family members to stay in the United States if he could because of difficult conditions there.

“We were a family to him. We took him in totally. He worked at HEB for many years, got married, and had a child.”

Noronha now lives in New Mexico with his daughter but still comes back to Brenham on a regular basis.

“He’s doing very well,” said Phillips. “It’s God working through me to do things like that. He calls me mom and KP is daddy. My daughters say he’s the brother they never had.”

On a recent afternoon, Phillips hosted Jenni Liu, a student from Germany who played on the women’s volleyball team; Georgia Biggs, a softball player from Canada; and Olivia Castillo from Brazil and Keegan Jones from Australia, both members of Blinn’s award-winning cheer team.

Biggs said it is difficult being away from her family.

“I grew up in the same house for 18 years. My parents were my best friends,” she said. “When I moved down here, not having them every day is a lot to adjust to. I lived on a small farm and went to school in a village of 1,000.

“Everybody in Brenham has been great. I’ve had people give me their phone numbers and say, ‘If you ever need anything, just call me up.’ Brenham is just awesome.”

Jones said having someone like Phillips can help fill the “gap” of being away from family.

The time difference between here and Australia is an issue, making “real time” contact difficult, he added.

“I can only message them, and they reply hours later,” said Jones.

Castillo, the daughter of an American mother and Brazilian father, said she grew up in a much larger city, and it’s taken some adjusting – especially getting used to the food. Attending Blinn marked her first time in Texas.

Liu, who went on to earn a volleyball scholarship from the University of Michigan, said her biggest adjustments was to a lack of sidewalks and the distance between places.

“You need a car to get somewhere,” she said. “I actually walked to Walmart once. I walked everywhere in Germany.”

Phillips said Blinn’s foreign students have much to offer the community.

“These kids are so wonderful and Washington County is such an amazing place to be,” she said. “Blinn is an awesome school, but there are so many people who have no idea we have international students here.

“I think it’s wonderful to open our minds to different cultures because we learn from each other. We learn to accept. We learn why we’re different.

“It makes the world a better place.”