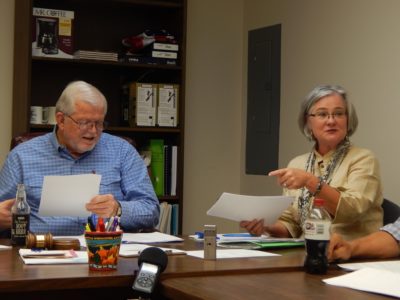 Tuesday, the Burton City Council removed an item addressing the city’s peacock population from the agenda. This came after the council tabled action on an updated animal control ordinance.

Before the meeting began, a Burton resident in attendance presented the council with 13 letters written by other residents, all in favor of allowing the birds to continue roaming the city. No one at the meeting spoke negatively of the peacocks.

Much of the meeting was spent discussing the new ordinance, which City Secretary Angela Harrington said was revamped from the existing one to make it more enforceable. She admitted the ordinance is still fairly basic.

Councilmember Jerry Martin said the problem lies with the fact that the city is struggling to enforce ordinances already on the books. He said no one would take the ordinance seriously because the city does not have the means to enforce it.  He stated the presented ordinance was a better fit for a big town, not for Burton.  Harrington said this ordinance is enforceable, but the city would need to look into an animal control officer.

During Mayor David Zajicek’s report, he announced the city would soon be getting a Mexican restaurant. Las Patrones Mexican Grill will fill the location on Washington Street, previously held by the Pig and Whistle pub.  The restaurant currently has a location in Giddings, and used to have one in Round Top.  Harrington said she expects the restaurant to arrive in about two months.

Also in session, the council: