Washington and Grimes Counties have a new sheriff, albeit an honorary one in a Brenham  Elementary School student.

Washington County Sheriff Otto Hanak and Grimes County Sheriff Don Sowell bestowed the honor on C.J. Herron.  C.J. is a fourth grader at Brenham Elementary but because of an autoimmune deficiency, he attends classes via a computer link, and through a virtual robot.

C.J. who will be 10 years old next month says it’s kind of ‘cool’ to go to school through a computer, and understands why his contact with other children needs to be limited. 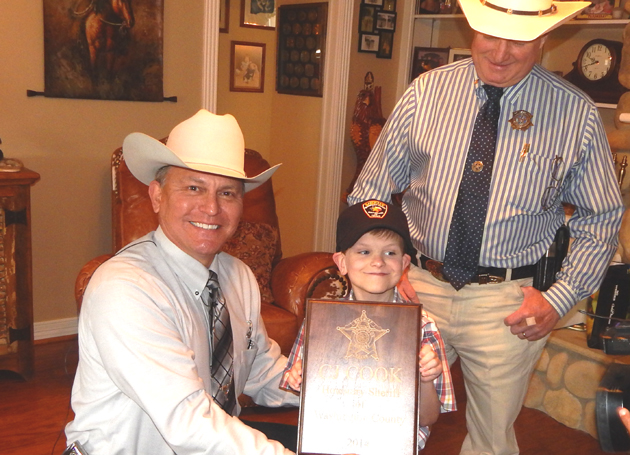 C.J.’s mother Lauen Cook said her son was born ten week’s pre-mature and has struggled through life since then.  He weighs only 38 pounds and his lungs have yet to fully develop.  She says he is taking therapy to  strengthen his immune system and hopes he can live something of an ordinary life.

C.J. has the same hope, saying he loves NASCAR racing and video games and hopes maybe, somehow he can make a living  through those activities.

Sheriff Hanak and Sowell said in a short presentation at C.J. home near Chappell Hill, that he has been a great inspiration to young people in our community.  This inspired C.J. because of his admiration of Texas lawmen.  Both lawmen presented C.J. with plaques naming him the honorary sheriff of the two counties.