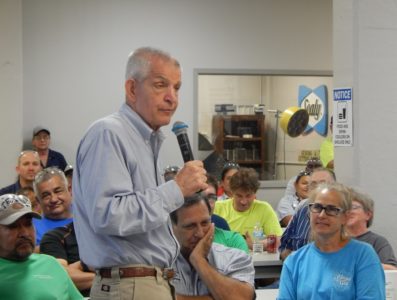 Workers at the Tempur-Sealy mattress plant in Brenham got the chance today (Tuesday) to hear from a renowned and iconic businessman.

Jim “Mattress Mack” McIngvale, owner and operator of the Gallery Furniture retail chain based in Houston, talked to members of the company about the start of his business on “$5,000 and a dream”, the value of hard work, and the importance of the Brenham plant to Gallery Furniture’s operation.

McIngvale told those in attendance he moved to Houston from Dallas in April 1981 with his wife, Linda. The two began selling furniture and mattresses under tents on the side of the freeway.  Before long, Gallery Furniture went from one location to three, and he claimed the same-day delivery the company does has “absolutely changed the furniture business forever”.

McIngvale added that many of the thousands of mattresses given out after Hurricane Harvey were made at the Brenham plant, and said workers there have “changed the lives of so many Houstonians and Texans” they don’t know about. 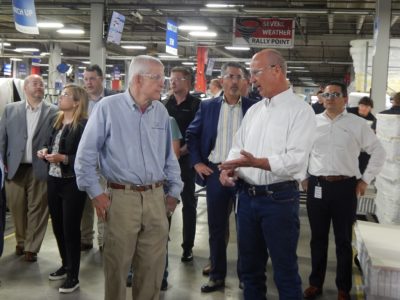 Workers at the Tempur-Sealy mattress plant in Brenham give Jim "Mattress Mack" McIngvale a tour of the facility.

McIngvale called work “life’s greatest therapy”, and said he wouldn’t know what to do if he didn’t work. He said his work is not just about selling mattresses, but rather about selling “a better night’s sleep, the dream of a better tomorrow, and the hope of a better future”.