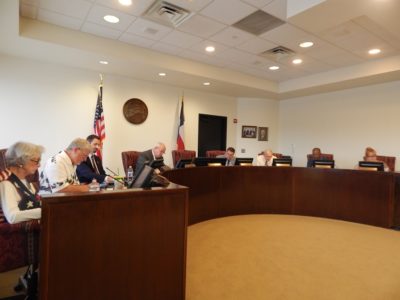 The council’s first scheduled meeting is a work session beginning at 10 a.m. Councilmembers will discuss the implementation of a drainage utility system, and calculation of drainage utility fees.

In its regular meeting at 1 p.m., the council will address the detention pond projects in the city’s Southwest Industrial Park and Brenham Business Center.

The council is considering accepting a $269,245 bid from South Central Texas Excavation and Construction, for rehabilitation of the pond in the Southwest Industrial Park.

The scope of work includes excavation of the current detention pond, vegetation removal, outfall improvements, and sloped concrete additions. Public Works Director Dane Rau said these improvements will allow the pond to handle growth on the horizon at the park.  The project will be funded by the Brenham Community Development Corporation (BCDC).

The work includes building a large regional detention pond for the area north of Woodward Creek. It involves excavation, installation of concrete pipe, wingwalls, sloped paving, soil retention blankets, seeding, and sediment control fencing.  Rau added that the project bid came in below estimated construction costs, which were projected at $659,533.

Both meetings will be held at Brenham City Hall.