Robin Chaney’s love of books brought her to the Blinn College District’s W.L. Moody Jr. Library on the Brenham Campus. 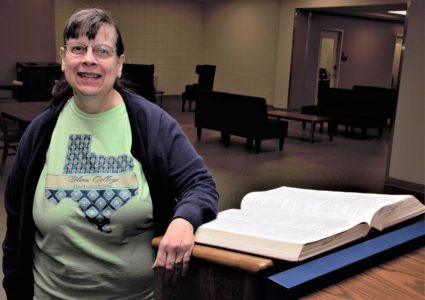 That same love has kept her there for 35 years.

Chaney marked 35 years as an assistant librarian this Fall, a position that has seen thousands of students pass through the Moody Library’s doors and giant leaps in technology.

She joined the Moody Library staff in 1984 after four years with the U.S. Army Corps of Engineers in Fort Worth, where she worked in its scientific engineering library.

The daughter of a military father who retired to Austin, Chaney made “librarian” her career choice after volunteering at a library.

“I enjoyed the work, so I thought I would major in that,” she said.

She earned a bachelor’s degree in government and master’s degree in library sciences from the University of Texas (UT) in Austin, then joined the Corps of Engineers before returning to UT for additional graduate training before beginning her career at Blinn.

Chaney said a college library offered her a chance to be involved in different subjects and not be limited to one area like she was with the Corps. With the Moody Library, she has a variety of assignments.

“I do all the cataloging for the library, so I make sure that the records for books and audio-visuals and other materials are all cataloged,” said Chaney. “I also do online records.”

Chaney agrees that libraries have evolved over the years, including the Moody Library, which was built in 1967. Last summer the library underwent a $2.4 million renovation that included new lighting, upgraded finishes and furnishings, improved electrical and technology connectivity, and heating-air conditioning and restroom upgrades. The circulation desk was relocated to the front of the building.

The library now has seven study rooms, two reading rooms, a seminar room, an enclosed computer classroom, a vending area and additional natural lighting. It even has a coffee bar.

Despite the changes, the library’s focus remains the same – the students.

Chaney said today’s students have more online resources but still rely on librarians’ expertise to show them how to use their plethora of options properly.

“They have to learn that you can’t just go anywhere on the internet and get help with your papers,” she said. “That’s part of our job, to teach them the differences between a website and scholarly research.”

Linda Gray, Director of the Moody Library, said Chaney is a valuable member of the library staff.

“Your average library user has no idea how important Robin’s job is,” Gray said. “The books would not be available to borrow, or even easy to find, if it were not for this role.

“And spanning a 35-year career in this specific and important role in libraries means she has seen changes that even library users ‘in the know’ can’t conceive.

“The electronic age hit libraries in the cataloging department first, and the dramatic modifications have been fast and furious and still are ever-changing. During my five months as library director, Robin has supported my work and always been willing to help. I appreciate her efforts.”