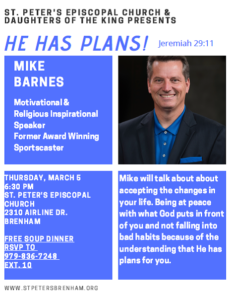 Mike Barnes will present “He Has Plans” on Thursday, March 5th at 6:30 p.m. at the church, located at 2310 Airline Drive.  Barnes will talk about dealing with everyday problems, accepting changes, and not falling into bad habits.

Barnes was an award-winning sportscaster in Austin for 29 years, named Best in Austin 17 times and Best in Texas four times.  For the past year, he has teamed with his wife in Barnes Team Media to consult and train people for on-camera and public speaking work.

The program, sponsored by the Daughters of the King of St. Peter’s Episcopal Church, is free and open to the public.  A light soup supper will be served at 6:30 p.m.