Grimes County authorities are looking for three men who are wanted on kidnapping, robbery, and assault charges. 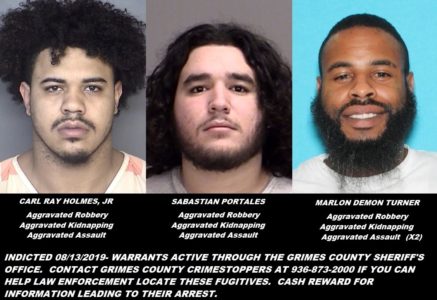 According to the Grimes County District Attorney’s Office, five people were indicted on charges from the incident in May, but these three have not been arrested.

Investigators say these suspects have active warrants through the Grimes County Sheriff’s Office, and have connections to Iola, Bryan-College Station, Madisonville, and the Houston area.

Due to ongoing investigation, details of the crime were not immediately available.  However, Holmes and Portales were arrested in May for their involvement in an incident on May 20th, where a victim was beaten, threatened with a knife, stripped and abandoned in a pasture.

Anyone who may encounter one of these men is warned to not approach them, and instead call authorities immediately.

Anonymous tips can be called in to Grimes County Crime Stoppers at 979-836-2000.  People can also call the Grimes County Sheriff’s Office at 979-773-2151.  Information leading to an arrest is eligible for a cash reward.