Two of the victims in a fiery accident last week in Fayette County are suing the grocer and trucking company they allege to be responsible for the accident. 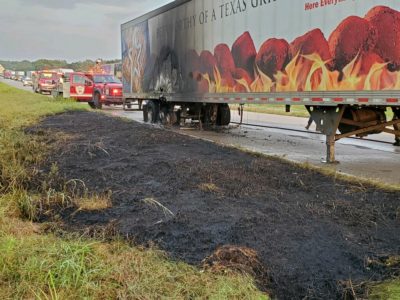 The scene of the accident on I-10 near Schulenburg on August 20th. (courtesy Fayette Co. Sheriff's Office)

Oliver Stokes and Shawn Wilson, who were severely burned in the August 20th accident near Schulenburg that injured them and killed three others, have filed suit against H-E-B and PGE Transport Inc.

The two, both of San Antonio, are being represented by Houston attorneys Mo Aziz and Troy Pradia.  The suit was filed Monday in Hidalgo County, PGE Transport’s principal place of business.

The multi-vehicle incident began when an H-E-B truck’s trailer axle caught fire while travelling westbound on I-10. The suit alleges this fire “significantly interrupted” the normal flow of traffic.  It also says, in the ensuing traffic backup on I-10, another truck operated by PGE Transport “failed to adapt to the changing traffic conditions”, and rammed into the back of the vehicle occupied by Stokes and Wilson.  This sent the plaintiffs’ vehicle airborne and caused it to catch fire.

The lawsuit claims gross negligence and malice against PGE Transport and the driver of the truck involved in the accident, Ricardo Palomo, who was killed in the accident. It also claims negligent entrustment against Erica Palomo, the owner of the truck Richard Palomo was driving, and negligence against H-E-B for failing to keep its truck in safe and working condition.

The plaintiffs claim they suffered physical pain, bodily impairment and disability, disfigurement and scarring, mental anguish, loss of wages and earning capacity, and medical expenses. They are seeking monetary relief of over $1 million.

At this time, it is unknown exactly what caused the H-E-B vehicle to catch fire, but the attorneys of Stokes and Wilson have filed a temporary restraining order, in order to preserve all vehicles involved in the collision so that investigators can perform necessary inspections.