Washington County Commissioners approved a memorandum of understanding between the county, its volunteer fire departments, and the Road and Bridge department at their meeting today (Tuesday). 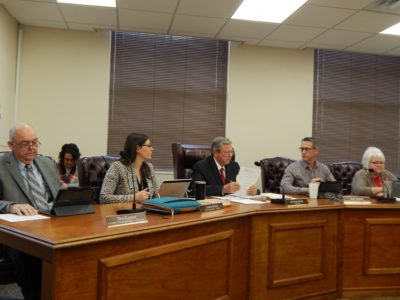 The “MOU” outlines proper procedures to follow between the entities in certain situations, particularly in regards to if the fire departments are in need of county equipment at the scene of a fire.

Emergency Management Coordinator Bryan Ruemke said, through this MOU, which was approved by volunteer fire chiefs at their meeting last week, the point of contact in those situations would be the Office of Emergency Management, not the Road and Bridge department.

Commissioner Kirk Hanath said the availability of that equipment is key in this document, as that is “what blew up the dust last time”, alluding to an incident in October where volunteer firefighters were denied the use of a backhoe by the Road and Bridge department to clear debris at the site of a large house fire.

Hanath said the county ended up getting accused of things it should not have been accused of, and this document will “make certain that none of that nonsense happens again”. He said this county, along with the Road and Bridge department, is for the people of Washington County.

Commissioner Joy Fuchs added it is not fair to appointed officials to be criticized and scrutinized without knowing all the facts, and said this MOU will take care of that.

County Judge John Durrenberger said this MOU “relieves the county of a great deal of liability”, while Commissioner Candice Bullock said it will help protect county equipment. Commissioner Don Koester said, during his time as a volunteer firefighter, the county was never called out to assist firefighters.  He said he believes the only reason that firefighters should call for county assistance is if life is in danger.

Also at today’s meeting, commissioners discussed, but did not approve, a resolution of intent to establish a Property Assessed Clean Energy (PACE) program in Washington County. The item was tabled due to the court agenda only listing “discuss”, not “discuss and act upon”.

City of Brenham Economic Development Director Susan Cates said the program, which allows property owners to leverage long-term cost savings to pay for renovations and upgrades, has received overwhelming support from the community. Hanath said the program is “another tool in the toolbox for economic development”.

Further information on the PACE program is available on the county website, www.co.washington.tx.us.