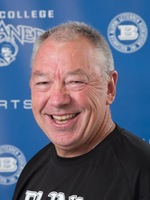 “We played good all weekend and I am really proud of the girls,” said Terry Gamble, Blinn head coach.

The Buccaneers earned their fourth straight sweep by taking down North Lake, 3-0, to start the day.

Blinn kicked off the match with a 25-19 win. Hortelan helped keep the momentum rolling for the Buccaneers, recording seven kills in the second set, for Blinn to claim a 25-20 win.

A strong defensive effort by Mullins, who jumped in with seven digs, helped lead Blinn to a 25-22 victory in the third set for the sweep.

The Buccaneers used a strong offense to defeat Southwestern Christian, 3-0, to conclude the tournament undefeated.

Blinn won the first set 25-6 and Mullins’ six aces in the second set helped lead the Buccaneers to a dominating 25-2 win. Blinn earned the sweep by defeating Southwestern Christian 25-7 in the third set.

Next, Blinn will return home to the Kruse Center on Tuesday, September 10, to take on Temple College at 6 p.m.