as remembered by Mark Whitehead

1963 Ford Falcon station wagon – This was the first car I can remember that was a “Radio Station Vehicle”  My dad, Tom Whitehead Jr. drove it daily.  It had a Marti remote transmitter in it that allowed live reports to be broadcast from any location within 5 to 10 miles of Brenham.  It was used to broadcast live from the Salt Grass Trail ride as well as major wrecks and fires.  The thing I remember most about it was that the speedometer and gauges were housed in a pod that was attached to the dash.  As a kid, I always thought it would be cool to build a dune buggy and use that gauge pod.

1973 Plymouth Valiant – The car was blue with a white vinyl top and white lettering on the sides and back.  It had a blue rotating light on top that made it look like a Barney Fife police car.  It had the same Marti remote transmitter as above, but also had a mount built into the rear fender that would hold several steel mast sections and a directional antenna.  Although it was a major ordeal to hoist it up, it did allow live broadcasts 10 to 20 miles from Brenham.  I remember it being used at Texas Independence Day Celebrations at Washington on the Brazos.  The thing I remember most about the car was that the skinny 78 series bias ply tires would squeal if you took a turn at anything faster than 15 mph. 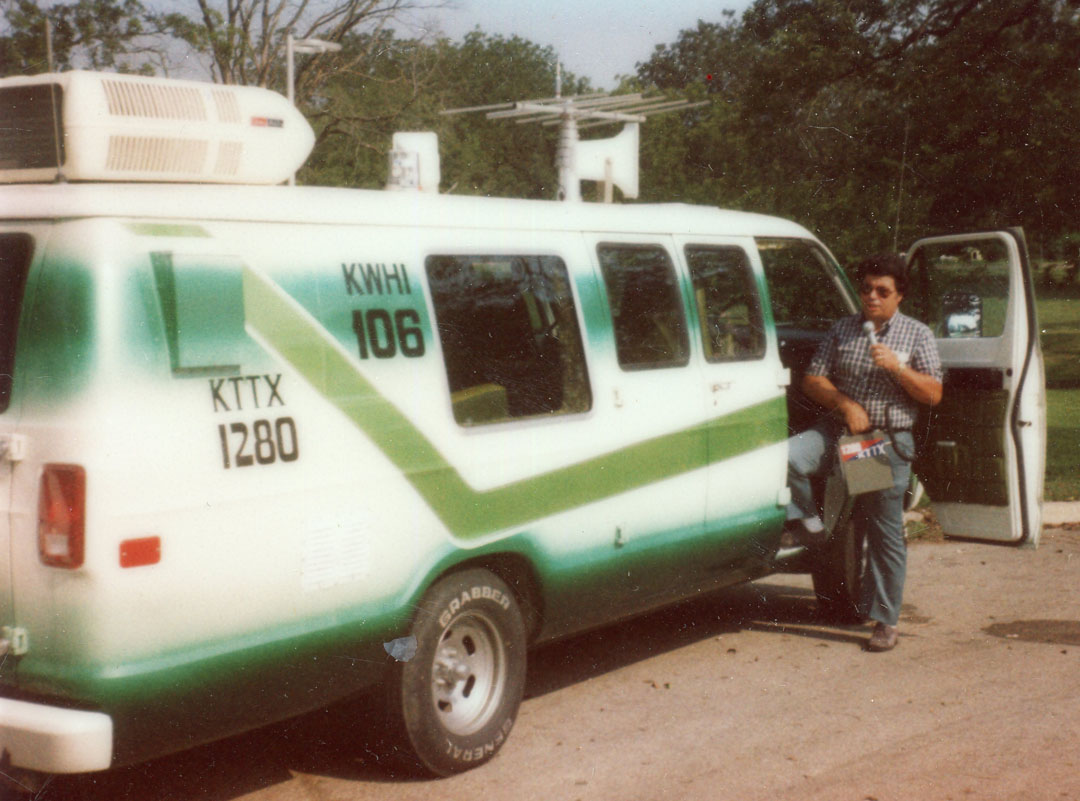 1978 Dodge Maxi-van – This was at the height of the custom van craze of the late 70s.  The vas was customized by a shop in Houston and had everything including lime green shag carpet.  This was our first vehicle that had a pneumatic mast to raise the Marti antenna up to 30 feet high.  This would allow live broadcasts anywhere in a 30 mile radius of Brenham.  It also had a rooftop air conditioner, an air compressor, a PA system, and an Onan generator.  The paint job was wild with multiple green colors and stripes.  The van would later be repainted dark blue with yellow lettering.  With all of the equipment located at the very back of the vehicle, it was a beast to drive.  The Onan generator and the roof top air conditioner were removed after a few years which improved the handling.

1980 Volkswagen Rabbit Diesel – My father purchased this vehicle during the gas crisis because it had the highest fuel mileage of any vehicle sold in America at the time.  Something like 50 mpg highway was the EPA estimate.  It had a 4 speed manual transmission and could hit 60 mph if you were going downhill, with a tailwind, on a good day.  It really didn’t care if you pulled away from a stop in 1st or 3rd, it would just chug along.  We spent the first year just dealing with fuel problems, mostly water in the diesel.  I remember the car being mostly driven by our news director, Ken Davidson.  That might explain why he always seemed mad about something.

1986 Ford Escort – We bought this vehicle used to replace the Rabbit Diesel when it finally died.  Nothing spectacular about the car, just basic transportation.  It lasted a few years until the head gasket let go. 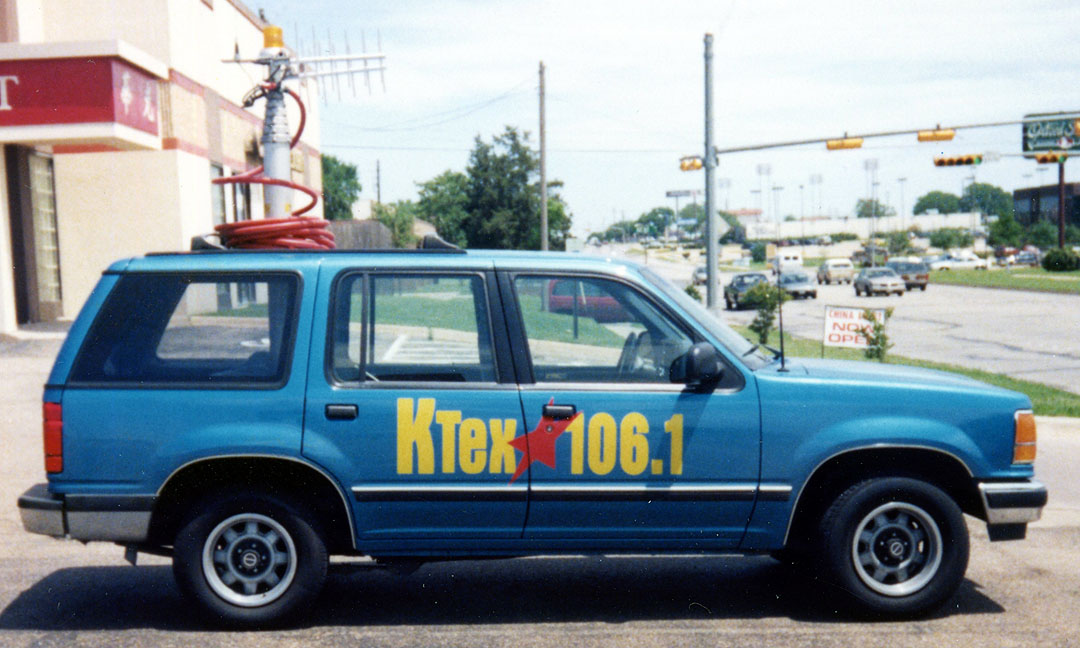 1992 Ford Explorer – This was the first “KTEX Hot Country Cruiser”  Bright blue with yellow and red graphics.  It utilized all that we had learned over the years with what did and didn’t work with remote vehicles.  It had a 30 foot tall pneumatic mast in the back with a new UHF Marti transmitter that allowed remote broadcasts up to 35 miles from Brenham.  It was used constantly during the early years of KTEX.

1992 Chevy Astro van – Bought to replace the 1978 Maxi-van.  The Marti transmitter and pneumatic mast from the old van were remounted in this van utilizing the same layout as the “Hot Country Cruiser” 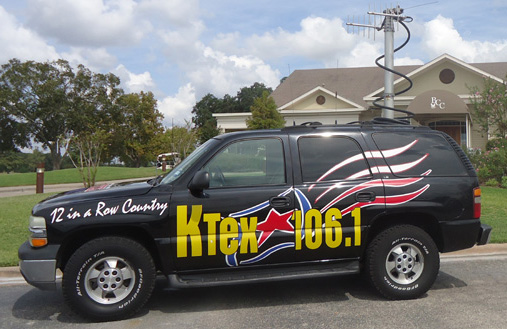 2001 Chevy Tahoe – Purchased to replace the 1992 Ford Explorer after it finally gave up the ghost.  It was black with yellow, red and white graphics.  It became the “Hot Country Cruiser” for the next 14 years.  The Marti transmitter and pneumatic mast from the Explorer were moved to it.

2003 Ford Escape – Purchased to replace the 1992 Astro van.  The pneumatic mast was mounted so that its base was actually beneath the vehicle so that the nested height was lower.  Used mainly by KWHI for numerous sports broadcasts. 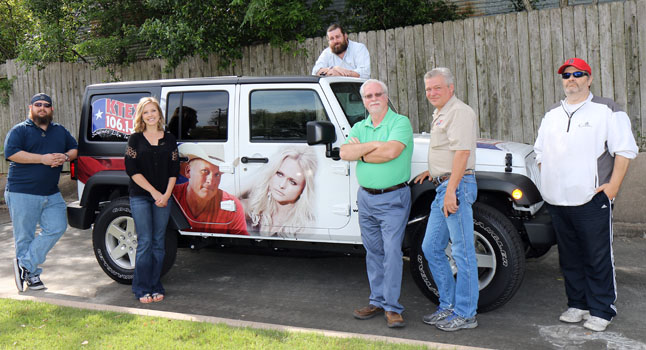 2016 Jeep Wrangler – The latest “Hot Country Cruiser” It is covered in wrap graphics that feature four popular Country musicians: George Strait, Miranda Lambert, Kevin Fowler, and Carrie Underwood.  The wrap was designed and applied by Newman Printing.  The vehicle doesn’t have a Marti transmitter or pneumatic mast because most remote broadcasts are now sent digitally to the studios over the cellular network. 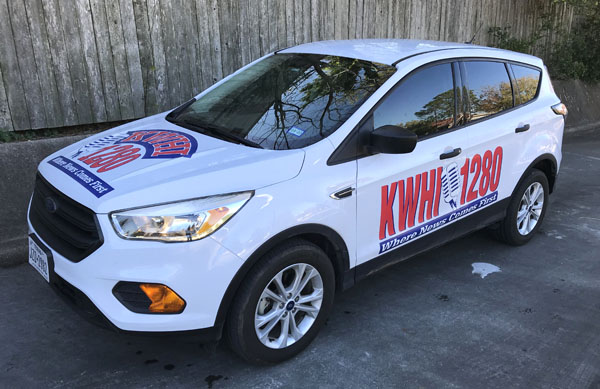