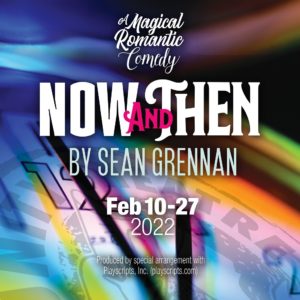 A romantic comedy will kick off 2022’s shows at Unity Theatre in Brenham.

Now and Then by Sean Grennan will play on Unity Theatre’s Main Stage February 10-27.

The performance follows how one night can be a life-changing event and shows the importance of the choices made through a lifetime and who they are made with.  As Jamie closes down the bar where he works, a last-minute customer offers him and his girlfriend, Abby, $2,000 to sit and drink with him.  As the three swap stories, the young couple realizes the older man is strangely invested in their decisions, but they realize why when a very displeased second stranger arrives.

The show will start with a preview night on February 10th, which will include a talk-back session with the cast and crew after the show.  The performance on February 19th will feature a director’s chat with Andrew Ruthven before the show.

Unity Theatre will require masks for the shows on February 19th and 20th, but all other performances are mask-optional.

Tickets are $27 and go on sale to the general public on January 31st.  Tickets to the preview performance are $19.  Student tickets and any seats unsold 15 minutes prior to curtain are $15.

All subscriber reservations and special price tickets must be purchased by calling the box office at 979-830-8358, but regular tickets are available online at www.unitybrenham.org.