The Chappell Hill Chamber of Commerce is offering two unique bidding opportunities for their upcoming annual 4th of July Parade.

The Chamber is auctioning of the chance for someone to be the “Official Parade Gunner.”  The Parade Gunner will help with the official opening ceremonies and have the once in a lifetime experience of firing the Kingfisher Cannon.

The Kingfisher Cannon is a five-inch smooth bore, 18 pounder that was loaned to the Chamber by Roger and Paula Imm.

Whoever gets named the “Official Parade Gunner,” will receive a tri-fold hat, an official certificate designating them as the 2022 Parade Gunner, and a commemorative cannon. 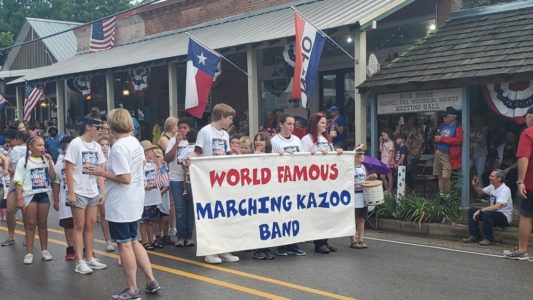 They are also taking bids for a chance to lead the “World Famous Marching Kazoo Band” during the parade.

The winner gets to lead the band as they play “Yankee Doodle Dandy” before the Review Stand and then lead them down Main Street with a personalized baton designed by Chappell Hill wood artisan, Todd Burch.

Anyone interested in either being the “Official Parade Gunner”, or the leading the “World Famous Marching Kazoo Band” can send in their bids to info@chappellhilltx.com.

Bids will close at 5pm on June 30th, with the winner being announced on July 1st.  The starting bid is $100 and the Chamber will update the bids daily on e-blast, and their Facebook page.