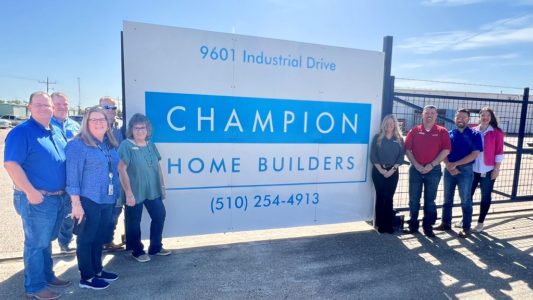 The City of Navasota announced today (Monday) that their application for a Texas Enterprise Zone project designation that they submitted on behalf of Champion Home Builders Inc. has been approved.

The Texas Governor’s Office of Economic Development and Tourism approved the project, which has a total capital investment estimated at $10.1 million.

Champion Home Builders Inc. already has a 270,000 square-foot plant that has been in operation since late last year and has over 100 employees.

Back in May, Champion also received approval from the Grimes County Commissioners for a Chapter 381 incentive agreement to help stimulate business and commercial activity in the County.

With the project designation approval, this allows Champion to create additional jobs in Navasota and Grimes County, which will impact the economic development within the region.

The project designation is effective until March 1, 2027. Champion Home Builders Inc. will be eligible to receive a refund from the state totaling up to $80,000 in state sales and use tax refunds as long as the guidelines for the project are met.

This is the first time since the Texas Enterprise Zone program has been established by the State, that the City of Navasota and Grimes County have ever nominated a business to be designated as an Enterprise Zone.

According to Champion Home Builders General Manager Scott Isom, they are grateful for the support from the community in Navasota and Grimes County.

He said that they are planning to hire an additional 150 employees over the next year as they get ready to open their second plant.