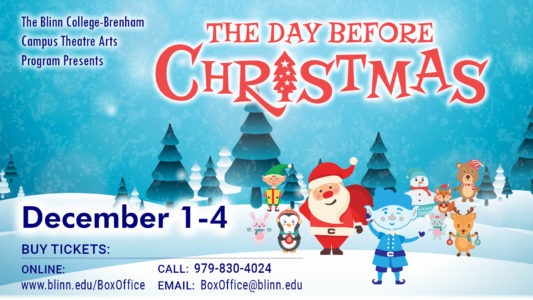 The Blinn College-Brenham Campus Theatre Arts Program is inviting the public to their holiday musical production of “The Day Before Christmas.”

“The Day Before Christmas” is Blinn’s annual faculty showcase, and it promises to be fun for the entire family.

The story of the play is that Santa Claus and his team are getting ready at the North Pole for the biggest night of the year, when a trickster known as Jack Frost shows up to cause some chaos.

The play is under the direction of Theatre Arts Instructor Jennifer Patrick, and the music will be directed by Instrumental Music Professor Jill Stewart.

Blinn Theatre students will round out the remainder of the cast.  They will also be joined members of the Brenham Broadway Kids from the Brenham Children’s Chorus as Santa’s elves, as well as, members from Center Stage Dance Studio as tap-dancing reindeer and snowflakes.

Tickets are $10 and available on their website at www.blinn.edu/boxoffice.