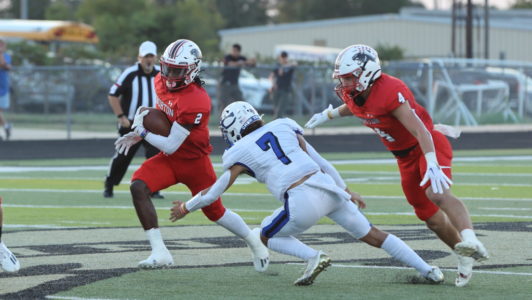 The Burton Panther Football Team is getting ready to face the Chilton Pirates in a battle of unbeatens later this (Friday) evening.

Kickoff is scheduled for 7pm at Merrill Green Stadium in Bryan. KWHI will have live coverage beginning with the pregame at 6:30pm on our KWHI.com Sports Alternate Feed, and the KWHI phone app. Alex Mearns and Darrell Kieke will have the call of the action.

Burton comes into the game 11-0 on the season, and were the champions of District 14-2A Division II.  So far in the playoffs, they shutout Milano 46-0 in the Bi-District Round, and Rocksprings 55-0 in the Area Round.

Chilton is 12-0 on the season, and were the champions of District 13-2A Division II. They beat Yorktown 39-14 in Bi-District and Brackett in the Area Round 48-7.

Burton Coach Jason Hodde talked about what type of team the Panther will be facing.