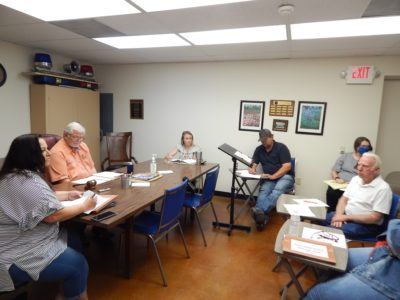 Several concerned residents came before the Burton City Council Tuesday to learn more about what the role of the city’s new code enforcement officer will be.

Members of the Burton Bridge Ministry and local churches asked about how homes in disrepair would be addressed by the officer, Tom Whitesides.  They were also worried that some disadvantaged homeowners could lose their home if found in violation of city code.

Whitesides explained that his responsibility will be to inspect homes and make sure they are compliant with city code.  He said while he will report what he considers to be hazards, he will not make any determination on them, as any action will be left up to the council.  He also said the council ultimately determines what ordinances he will consider to be a priority.

Whitesides said homeowners who are found in violation of city code will be given time to resolve any issues before fines occur.  Mayor David Zajicek said the council would be willing to work with the Burton Bridge Ministry to help residents.

Also at Tuesday’s meeting, the council heard an appraisal update from Washington County Chief Appraiser Dyann White.  White said she expects the city’s taxable property value to increase about 1.5 percent, and plans to have more firm numbers next month.

The council also moved to re-appoint Councilmember Nathan Kalkhake as mayor pro-tem.  It also tabled action on repairing or replacing the lights that shine on the flagpoles on Highway 290 in Burton.  Harmel Electric presented a quote of $1,876 to fix both poles, but did not provide full specifications for the repairs.

During his monthly report, Zajicek said several areas of the city were affected by the heavy rain recently.  He said the rain caused erosion throughout the city and flooding at city hall, as well as several fallen trees.  He said the city should be receiving some funding soon to help with roads, drainage and other infrastructure.