Two items on today's city council addenda drew a considerable amount of discussion.  The first was for a noise variance for the Maifest Royalty Run on Sunday morning, May 3rd.  The 5K run is scheduled to begin and end at Henderson Park and that is where the Maifest plans to have the PA set up.  The discussion among council members had to do with the proposed route of the run.  The run is planned to follow the hike / bike trail from Henderson Park, across Blue Bell Road to the High School, then through the Overlook subdivision adjacent to the High School.  Council member Andrew Able questioned if the residents in the neighborhood had been notified about the run.  The request for the run did not require any roads to be closed, so the only approval was for the noise variance.  The council voted to approve the variance for the run with the condition that the organizer seeks input from the residents in the Overlook subdivision and report back to the council.

During the workshop portion of today’s meeting the council discussed implementing a permit and fee schedule for special events in downtown and other areas in the city.  Currently the city provides support for these events at no cost.  Assistant City Manager Kyle Dannhaus explains: 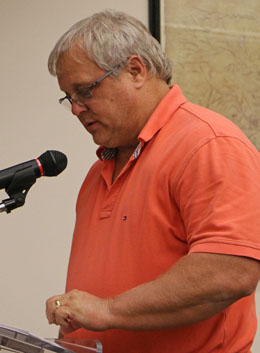 The proposed draft of event application would exempt government entities from having to pay a fee to the city for services.  That would include events like the Homecoming Parade and Hot Nights – Cool Tunes which is organized by Brenham’s Main Street Board.

Councilman Mary Barnes-Tilley objected that non-profit events like the Adam’s Angel’s Run and Relay for Life would have to pay fees.  Mayor Milton Tate stated that most taxpayers expected the city to cover events like the Homecoming Parade, that it was part of small town life.  Police Chief Rex Phelps said that his department does require some organizers to pay off duty police officers to cover security at events depending upon the nature of the event, the number of people expected, and the past history.  The city council decided to hold another workshop on the topic during a future meeting.