Park space in Brenham, already with 200 acres of park land, increased by one third after a donation this (Wednesday) morning from Ed and Evelyn Kruse.

The Kruse’s signed over the land, 100 acres just east of Home Depot, at a city hall ceremony.

Ed Kruse said that while there is a lot of park space in the city there is still a need for more. 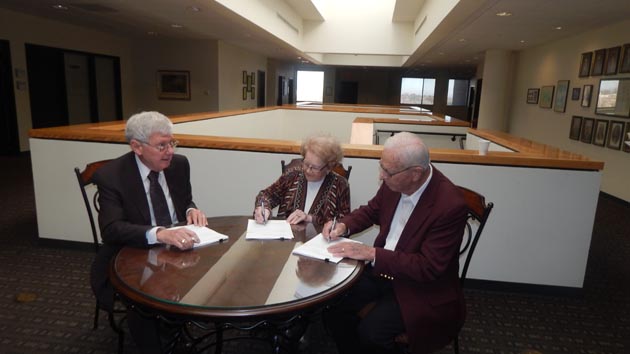 City Manager Terry Roberts says the Brenham Community Development Corporation will fund the roadway leading to the future.  The park, which will be built in an undetermined future, will be first designed for families, and will feature a lake.

Mayor Milton Tate, accepted the gift on behalf of the city, saying this is one of the reasons the Kruses are known for community service. Tate said the park was given without any time stipulation for its development for the city.

The construction of the access road leading to the park site, along with the installation of preliminary utility infrastructure will provide access from U.S.290 with the extension of Chappell Hill Street.   The road will be a joint project by the Kruses and the city.   The city will be paying  a portion to oversize the road to meet future needs of a main thoroughfare.

One of the first needs will be construction of a lake that will also serve as a detention area for any future development.  The lake would be located on Woodward Creek, and will become a central feature of the park.  City Manager Terry Roberts said the lake should be a central focal point of the park, with fishing, hiking and picnicking for people in Brenham and the surrounding area. 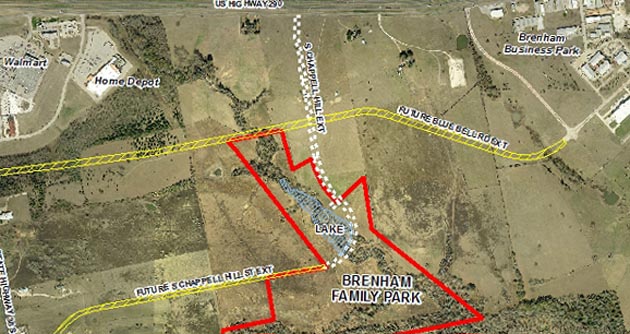