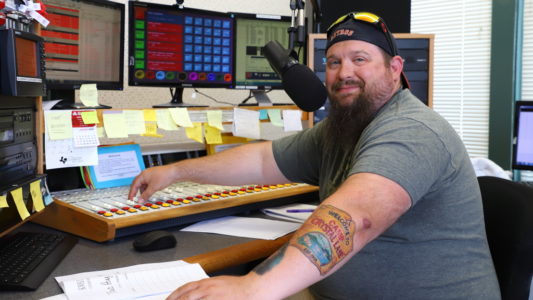 He Did What Now?

Products of a Deranged Imagination

Craig Montana was born and raised in Somerville, Texas. He studied Communication at Blinn College to become a DJ and showed up on KTEX/KWHI’s doorstep in 2002 and pestered them until they gave him a job.

He has always loved music and wanted to be a radio DJ ever since high school. You could say it was the first thing he wanted to do, if you don’t count wanting to be and astronaut or bull rider as a kid. He now works as the Program Director for KWHI and is an on-air personality.

He spends majority of his free time wrangling his two kids and hoping he is doing right by them, but when he isn’t doing that, he tries to get out and discover new beers. One time he was floating the Frio, hit some slick rocks, and fell out of his tube seven times. However, much to the amusement and amazement of the people sitting on the bank, he never spilt his beer once.

Get to Know Craig Montana

Favorite Book – The Hitchhiker's Guide to the Galaxy by Douglas Adams (He feels like he identifies with Arthur Dent because he really wants to go home and relax, but also, he cannot, as he must save the universe. He also showed up to work with a beach towel on May 25th for Towel Day.)

Favorite Quote– “You woke up this morning knowing who you are. Now go out and find out who you can become.” – Turk Pipkin

Describe your job to someone from another planet: “I tell people what’s happening in the world around us, and occasionally let music play”

What song would you choose to play every time you walked into a room? “Master of Puppets” by Metallica because it’s his favorite song with a great message (don’t do drugs).

How the Other DJs Would Describe Him in One Word

Fun Facts from the Other DJs

“Craig knows more about beer than anyone I know” – Tracey Lawless