The Washington County Sheriff’s Office is searching for a suspect in a chase involving a stolen pickup.

Authorities are looking for 34-year old Louis Duane Ryhne of Austin after he allegedly led authorities on a chase through western Washington County late Tuesday afternoon.

The vehicle,which was being tracked by On Star, had been reported stolen in Austin and heading east Brenham on highway 290.

Deputy Brad Kulow spotted the vehicle on F.M. 389 and the chase was on, leading onto South Berlin Road, then Old Mill Creek Road and back onto 290,at speeds in excess of 80 miles per hour.

The chase then led to F.M. 390 where Brenham Police where he lost sight of the vehicle.  A short time later Brenham Police reported a crash at Wolf Creek Road.

A woman, identified as 40 year old Tiffany Duncan of Austin, was found near the truck with minor injuries.

Duncan said Ryhne fled the vehicle.  After an extensive search, officers failed to locate Rhyne.  A warrant has been issued for felony Evading Arrest with additional charges pending.

Duncan was transported to Baylor Scott and White Hospital in Brenham where she was treated for minor injuries and later released.

The stolen pickup truck was a total loss. 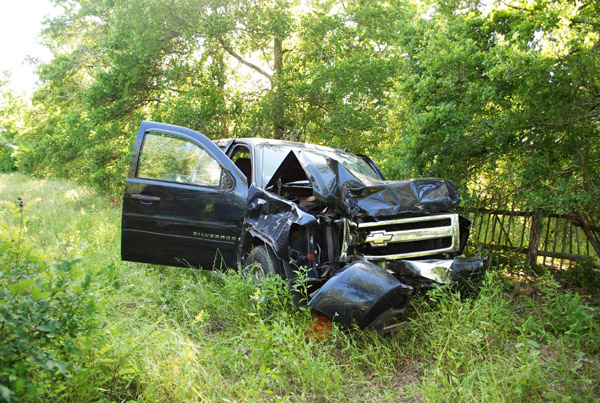 In a related story, Washington County deputies were called out just before 9:30 Tuesday night to Old Gay Hill Road in reference to a stolen vehicle.  This location was only a short distance from where Ryhne ran from the first stolen vehicle and he is a suspect in this particular theft.

According to Sheriff Hanak, the owner of a 2011 Chevrolet pickup truck reported the vehicle stolen after he returned from working in a nearby field.

That vehicle was later located on F.M. 278 in Burleson County, with no sign of Ryhne.