Brenham High School has announced the schedule and the theme for next month’s homecoming activities. 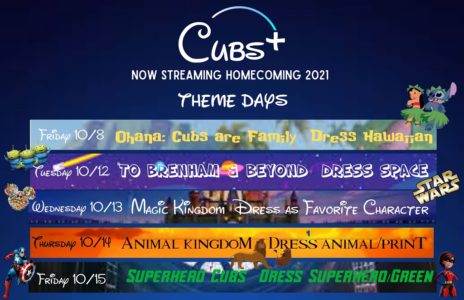 The theme for homecoming this year is “Cubs+,” putting a Cub spin on the Disney+ theme.

On Friday, October 8th, Cubs are encouraged to dress Hawaiian for “Ohana: Cubs are Family”.

Space influenced the theme of Tuesday, October 12th, “To Brenham and Beyond”.  Students will be able to dress out of this world with space attire.

Cubs can dress up as their favorite character on Wednesday, October 13th for “Magic Kingdom”.

On Thursday, October 14th, students can lead the “Animal Kingdom” and dress up in animal print.

Students can become “Superhero Cubs” on Friday, October 15th and dress up as superheroes and in Cub green.

The homecoming parade will be held in downtown Brenham on October 13th at 6 p.m.

On October 15th, Cubs will continue their homecoming traditions by enjoying the pep rally, attending tailgate during all three lunches and cheering on the Cubs as they take on Pflugerville Connally at 7 p.m.  The queen will be announced during halftime, and the king will be announced at the end of the game.

Cubs will finish the week by attending a homecoming dance on Saturday, October 16th.  Details for the dance will be released at a later date.