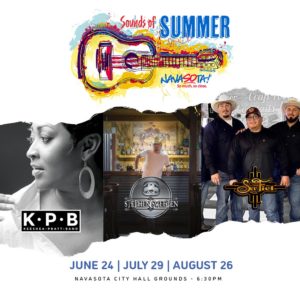 The “Sounds of Summer” concert series in downtown Navasota has announced this year’s performance lineup.

Three free concerts will be held on the last Friday of June, July and August on the Navasota City Hall grounds, starting at 6:30 p.m. each night.

The series will kick off on Friday, June 24th with the Keeshea Pratt Band.  The Stephen Sweeten Band will hit the stage on Friday, July 29th.  Popular Tejano group, Ser Fiel will close out the series on Friday, August 26th.

Food trucks and drink vendors will be on site.  Guests are encouraged to bring lawn chairs and coolers.

To learn more, visit the City of Navasota Facebook page.