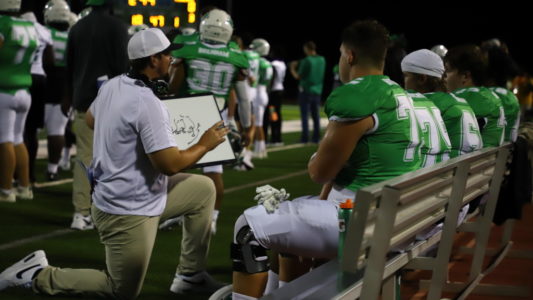 New Braunfels got on the board early with a touchdown and two field goals to take a 13-0 lead at the end of the first quarter.

Rylan Wooten got the Cubs on the board in the second quarter with a 15 yard touchdown pass to Keith Crawford.  Grant Mayfield added the extra point to make it a 13-7 game at the 7:38 mark.

The Unicorns then scored 17 points on a field goal and two touchdowns in the final 3:20 of the second quarter to take a 30-7 lead at halftime.

Neither team got on the scoreboard in the third quarter.

New Braunfels added a field goal to start the fourth quarter to make it 33-7.

Wooten would then find Reid Robinson on an eight yard touchdown pass with 10:17 left in the game and an extra point by Mayfield made it 33-14.

The Unicorns tacked on another touchdown to make it 40-14.

Wooten scored on an eight yard touchdown run with 2:21 to go.  The two point conversion try was no good.

The Cubs will host Richmond Randle for their Homecoming Game next Friday at 7:30pm at Cub Stadium. (7pm pregame on KWHI)