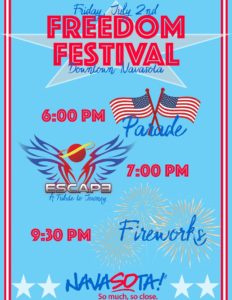 Downtown Navasota has a full day of Fourth of July activities in store at the 2nd Annual Freedom Festival.

The event will be held on Friday, July 2nd, and will feature the annual Fourth of July parade, live music, fireworks and family fun.

The parade will begin at 6 p.m. on Brosig Avenue, travelling west on Washington Avenue to Ninth Street.  Participation in the parade is free and does not require registration.

The Journey tribute band Escape will take the stage outside of Navasota City Hall at 7 p.m.  Vendors will be selling food on site.

The celebration will round out with fireworks at 9:30 p.m. at Brule Field.  Spectators are invited to stay in downtown Navasota following the festivities or begin arriving at the field at 8 p.m. to watch the fireworks.

The free event is provided by the City of Navasota.