Update 5/17 @ 1:39 p.m.: Saturday's balloon release event has been cancelled.  Event organizers say it was due to negative feedback received from the public, with some people expressing concerns about the agricultural risks of releasing balloons into the atmosphere. 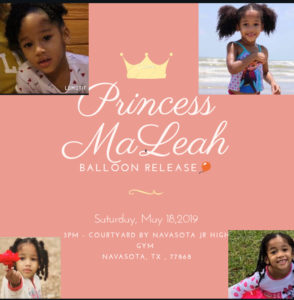 The event in recognition of Maleah Davis is slated for Saturday afternoon at 3 p.m., in the courtyard by the Navasota Junior High School Gym.  The event is being planned by Navasota residents Salina Lindley and Tara Gamble, a pair of mothers with children close to Maleah’s age.

Nearly two weeks have passed since Davis went missing in Houston.  The case has received attention across the world and especially in the Brazos Valley, with similarities to the disappearances of Rayven Shields and Hazana Anderson.

Saturday's balloon release is open to the public. Those who attend are asked to bring balloons and wear pink, purple or white.