The Blinn Board of Trustees has unanimously authorized the issuance of pro-rated refunds or credits to students for the Spring semester for housing, food service, and parking. 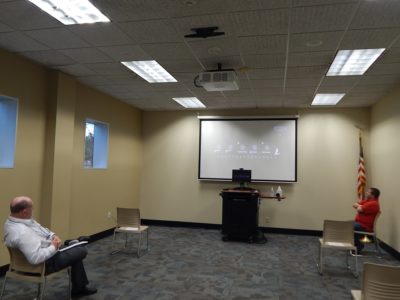 Blinn staff members listen to board trustees as they held a meeting via teleconference Thursday morning. Public access to the meeting was limited to Rooms 2 and 3 of the Brenham Campus Student Center. According to Blinn Chancellor Dr. Mary Hensley, this was the College's first board meeting ever held by teleconference.

At the board’s meeting via teleconference this (Thursday) morning, Vice Chancellor Richard Cervantes said students will be refunded fees for those areas for the period of March 15th through May 14th.  Students will be given an option to apply any pro-rated amounts as a credit to their Fall 2020 student fees, or receive a direct refund.  The amount of any refund or credit will first be used to cover any current balance in students’ fee accounts, with any remaining amount refunded.

Cervantes said the College intends to issue refunds through a weekly allotment, and is prepared to issue the refunds as soon as it gets information on the options students have chosen and if they have checked out of their student housing.

Cervantes was unable to report exact refund totals, but the estimates he gave showed Blinn housing refunding $889,000, with Mill Creek Hall on the Brenham Campus expecting to refund less than $600,000.  Cervantes estimated Mill Creek’s refund would be closer to $575,000.  Meal plan refund estimates, according to Cervantes, would come out to $715,000, with parking refunding an estimated $273,000.

Trustee Douglas Borchardt asked whether private-paying individuals using the Kruse Center would get any refunds, to which Cervantes said the College is not currently entertaining any thoughts of issuing refunds for those people.  Trustee Dr. Dennis Crowson then asked if students who paid a fee at the beginning of the semester to take courses online would be refunded, to which Cervantes replied, at this point, the College is not entertaining any notion of refunding those, either.

Students living in on-campus housing will need to make an appointment with their hall director, remove their belongings, and return their room and mailbox keys by April 20th to be eligible for the housing refund.  Students who are unable to retrieve their items due to travel restrictions must contact their hall director no later than April 20th.  Special consideration for extended time to retrieve items will be considered on a case-by-case basis.  Vice Chancellor Karen Buck noted there are currently 15 students still using Brenham Campus housing due to extenuating circumstances, but she does not expect that number to go up.

All students who arrive on campus to retrieve their items are asked to maintain social distancing of at least six feet.  The College is limiting the number of students who may enter campus facilities at one time.  For more information regarding the move-out process, contact Housing and Residence Life at housing@blinn.edu.

Also at today’s meeting, the board approved a $57 per credit hour tuition rate for residents of the taxing district (Washington County), a $115 per credit hour rate for Texas residents from outside the taxing district, and a $274 tuition rate for out of state and foreign students.  The general fee was set at $70 per semester hour.  The rates represent a $2 increase for in-district and non-resident tuition and a $3 increase in out-of-district tuition and general fees.

The board also approved adjustments to the College’s housing and food service rates, as well as changes to course, lab, and auxiliary fees.  The College plans to propose a 3 percent salary increase for full-time faculty and staff, and a $50 per course increase for part-time faculty in the 2020-21 budget.