BMS AND ALTON WORK AHEAD OF SCHEDULE

Two months from now the faculty and staff at the new Alton Elementary School and the freshly renovated Brenham Middle School will begin their new school year at those respective locations,  but observers have noted there still is plenty of work to do.

Both sites show signs of intensive construction work, in anticipation of the opening of the school year on August 25th.

Alton Principal Michael Ogg says the teachers have already boxed up their books and other materials headed for the new home 1301 South Market.  This is the one-time site of the Brenham Elementary School.  Ground was broken on the site a year ago. 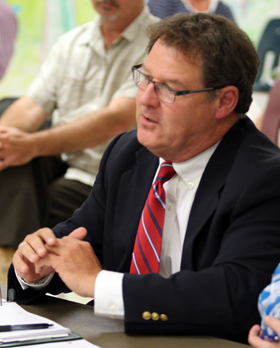 The work also continues on the renovations at Brenham Middle School, and some people driving by say there is plenty of work to be done.  Assistant Brenham School Supt. Byron McAdams said at a recent school board meeting that essentially the ‘shell of the school is being demolished’ for the renovations.  McAdams had reported that ‘it was getting very exciting’ to see the progress on the schools.   He assured members of the Brenham  School Board that the board would be able to tour the two schools before the faculty and staff come to work in mid-August.  McAdams acknowledged that there is a lot of demolished materials at the Middle School but no one should be concerned.  He said demolition could not begin until the end of school and all the material will be gone by the end of the week.  He says the work is actually ahead of schedule.

This demolition work should be cleaered by the end of the week.

The work on the schools began after Brenham School District voters approved a $26 million bond issue in May of 2012.