The Brenham City Council has voted in opposition to a previously approved tax-credit home development proposed on Pecan Street. 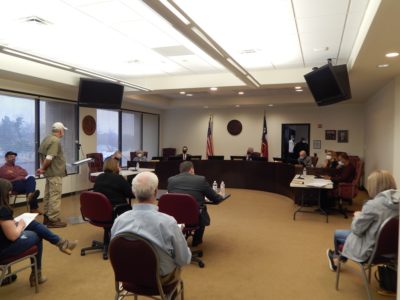 After over a dozen citizens spoke at today’s (Thursday) meeting to voice their disapproval, and dozens more attended, the council voted 6-1 to reject a resolution supporting Sandy Point Housing, Ltd.’s housing project and to rescind its prior approval of the resolution it voted unanimously in favor of at its meeting February 4th.  Councilmember Clint Kolby was the lone vote in favor of the item.

The proposed Low to Moderate Income (LMI) development was planned to consist of 27 single-family homes located on 9 acres on the north side of Pecan Street, west of Loesch Street and east of Kerr Street.

None of the residents who spoke at the meeting were in favor of the development locating on Pecan Street.  One of those who spoke was Craig Blum, a resident on Yager Drive, who said while he is in support of more single-family homes, he does not believe these will fit that bill.

Lauren Cox, speaking on behalf of her mother and Pecan Street resident Robin Cox, said she believes housing that is 100 percent rental based should be kept separate from other homes as any other complex or subdivision would be.  She also said these homes seemed to defeat the purpose of low to moderate income housing in general.

Brian Fathauer, who lives on Pecan Street, said this development de-incentivizes home ownership, and cited data showing that Brenham ranks 9th statewide in the number of subsidized housing units while being 167th in total population.  He also challenged the council to look at projects like these more critically.

Other residents who spoke cited concerns such as increased traffic and lower property values.  Some citizens agreed that more affordable housing is needed, but others stated there is enough as is.  Many encouraged the city to look further into a residential needs assessment to determine the true need for housing.

Several expressed disbelief in previous claims from Sandy Point Housing developer Emanuel Glockzin, Jr. that the homes would value at $350,000 apiece, with some pointing to self-researched data that showed the homes valued hundreds of thousands of dollars less.  Glockzin stated his previous estimates that the overall development would value at $10 million come from the sale of tax credits, which he said allow the homes—which measure at 2,200 square feet, hold four bedrooms and two bathrooms, and are 85-90 percent brick—to be rented at $1,100 per month.

The resolution came back before the council because the one previously approved did not include required language from Texas government code.  City Manager James Fisher explained that, according to state code, if a city is over two times the per capita number of housing tax credit units, the city’s approval of a resolution granting support for the housing project becomes a “have to.”

In circumstances where a city is below the two times per capita mark, a city’s resolution of support is used in a scoring matrix by the Texas Department of Housing and Community Affairs (TDHCA) to decide whether to grant funding for a project.  According to the 2021 Site Demographics Characteristic Report issued by the TDHCA, Brenham has three times the amount of housing tax credit units per capita than the rest of the state.  Since the city did not approve the resolution, the TDHCA will not grant funding for the project.

Fisher said he has been in contact with the office of State Senator Lois Kolkhorst, who plans to draft legislation putting together provisions to make more information available for residents and cities concerning projects like these.

Brenham Mayor Milton Tate noted before any public comments were made that the city council was first made aware of this development at its meeting earlier this month.  At that time, the council requested that Sandy Point Housing contact the citizens living in the area.  Glockzin said letters were sent out to approximately 60 surrounding property owners, but several in attendance indicated they had never received the letters.

Prior to the meeting, Kolkhorst and State Representative Ben Leman asked the city to show restraint and perform more research on LMI developments before adding more.

Councilmember Keith Herring said he initially showed support for the project because he had received information from the Washington County Chamber of Commerce on median household income and rental properties.  He said there is not much rental property available in the $1,000 per month price range at the square footage proposed by Sandy Point Housing.  He also pointed to past conversations with former Brenham ISD Superintendent Dr. Walter Jackson that revolved around how difficult it was for teachers to find housing.

Councilmember Susan Cantey said if she had known the information given by Fisher when first addressing the resolution earlier this month, she would not have considered the development “at all.”

Councilmember Clint Kolby reiterated his support of promoting affordable housing.  He called back to his time working with the Brenham Economic Development Foundation, speaking with businesses that told him their employees could not find housing.  He said these homes are “high quality” and “fit in with the character” of the existing neighborhood around Pecan Street.  He also said he has performed research on the property values of homes adjacent to existing tax-credit developments, and said those homes “have consistently increased in value over the long term.”

Councilmember Andrew Ebel said it was important to make sure local residents are included in this discussion, and said he thought “that’s why we’re at this place today.”

Councilmember Adonna Saunders felt the council was misled by the developer on the tax credit process.  She said from the information given last week by Glockzin, she believed that the state would have the final say on the development, not realizing that the council’s approval in this situation would be the deciding factor.  She also believes the city has enough government housing, and that it should be a “stepping stone,” not a long-term option.  She recalled Glockzin saying at the previous meeting that he has had several tenants at Sandy Point Housing’s location on Santour Court in College Station who have lived there since they opened in 2007.

Councilmember Albert Wright said he thought the council “didn’t have all the information” when making its decision on February 4th.  He said affordable housing is a great need in Brenham, but understands the concerns of the community and the need to keep them informed.  He said the city can do more study and “a better job going forward” when considering projects like these.

Cantey said upon motioning to reject the resolution that she wanted this “back to zero as if it never happened.”