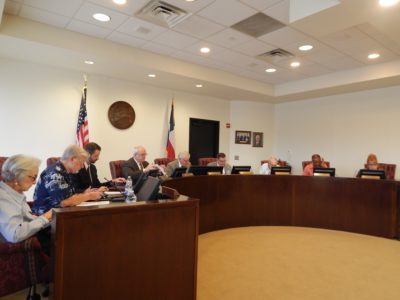 The Brenham City Council has agreed to allow a new Fixed Base Operator (FBO) at the Brenham Municipal Airport.

The council at its meeting today (Thursday) approved a ten-year agreement with Aviators Plus, LLC. The new FBO intends to construct a new building at the airport public ramp, nearby the city-owned fuel tanks and the restaurant operated by current FBO Southern Flyer, run by Jack and Janet Hess.

Aviators Plus has been servicing aircraft and offering charter service at the airport for a number of years. They will now be able to sell fuel and perform full-service operations, including aircraft line servicing.

Assistant City Manager of Public Utilities Lowell Ogle said the official FBO proposal from Aviators Plus came in in January, but that Aviators Plus President Brent Nedbalek had been requesting to provide services for several years.

Ogle said this agreement puts an emphasis on events to promote the airport.

Nedbalek said he hopes to create an FBO chain in the area, with this being the first one and the home base. He said he wants to be more proactive and hands-on with customers, in order to attract more people into Brenham and grow the aviation community locally.

Ogle said he has been asked if the airport can support two FBO’s, and added it’s not really the city’s call at this point, as long as the airport has enough space to support the new operations. He said there will naturally be some things to work out in the process along the way.

Councilmembers were in favor of the proposal, with Councilman Clint Kolby saying it could be a “catalyst for new activity” at the airport. Councilman Keith Herring also expressed optimism, and said the airport is a “hidden jewel”.

Nedbalek said he hopes to break ground for the new building in the first quarter of 2020. However, Ogle said Nedbalek can meet minimum standards from his current, so the agreement will allow him to start FBO operations immediately.  A lease agreement will come before the council in the coming months.

The council then adjourned into executive session to discuss the annual evaluation of the City Manager. No action was taken.