The Brenham City Council will discuss the continuation of a local disaster declaration related to last week’s severe winter weather at its meeting Thursday. 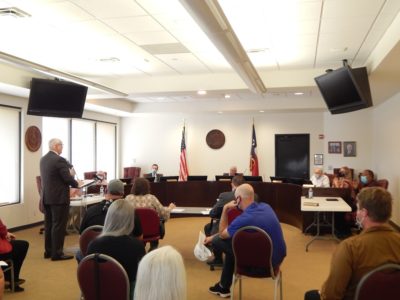 On February 16th, Mayor Milton Tate signed a local disaster declaration in response to Governor Greg Abbott’s emergency declaration signed on February 12th.  Due to the uncertainty of the effects of this winter weather emergency, city staff are requesting that the council consider extending the declaration.

In other action, the council will consider ordinances amending the rate tariff schedules for the city’s water services and sanitary sewer system.  City staff have conducted a review and cost study of the various water and wastewater services provided by the city, and their findings are that the majority of services are being provided either free of charge or at a fee that is much less than the actual cost of the service.

The results of the study were presented to the council at a workshop on November 19th, where the council discussed the possibility of raising the cost of installing a water meter or sewer line tap.  Staff have since met with the utilities subcommittee, and the plan is to phase the increase in cost equally over three years.  If the ordinances are approved, the rate changes would not go into effect until October 1st.

The council will also meet in work session to receive a presentation and update from City Manager James Fisher on the Regional Vaccination subHUB at the Washington County Expo.

Also at Thursday’s meeting, the council will consider:

The council will meet Thursday afternoon at 1 p.m. at Brenham City Hall.