Brenham ISD has received over half a million dollars in Hurricane Harvey funds. 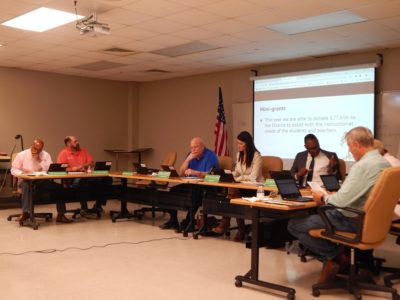 During the school board’s meeting Monday, Business and Finance Director Kim Weatherby announced that on August 27th, the district received $555,940.

The extra funds came from the passing of Senate Bill 500 in the 85th Legislative Session, which appropriated monies to school districts who experienced a drop in property values due to Hurricane Harvey.

Weatherby said this new funding will likely be used for one-time purchases, and added that she wants input from the board on what to do with the funds in the 2019-20 school year. A workshop to discuss the uses for the funds is currently scheduled for November 4th. 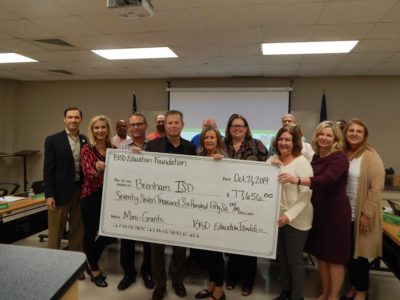 Members of the Brenham ISD Education Foundation with the Brenham School Board, after presenting the board a check for $77,656.

Weatherby went over some of the potential uses for the funds, including a master facility plan, a roof for the technology and tax office, improvements at individual campuses, curriculum and instructional needs, and extracurricular needs. She said the district will explore all options and try to make a good plan on how to use these new resources.

Weatherby also announced that this year, the Brenham ISD Education Foundation will present $77,656 in mini-grants for instructional needs for campuses, grade levels, and teachers across the district. Weatherby said the Foundation, celebrating its 15th anniversary, will distribute the next round of grants on Thursday and Friday.

Also at Monday’s meeting, the board heard an update on the Target Improvement Plan for Alton Elementary, Brenham Elementary, and Brenham High Schools. The principals for each of the schools discussed their plans for targeted improvement, including a focus on data-driven instruction, creating a safe environment and positive culture for students, and developing campus instructional leaders with clear roles.