BRENHAM POLICE CHIEF FOR A DAY

Brenham Police Chief Rex Phelps stepped aside Wednesday as the police department swore in a ‘Chief for a Day.’

Eleven year old Traelan Nickerson headed up the Brenham police department for the day. Public Information Officer Angela Hahn says Cpl. Lance Weiss had befriended the boy who suffers from brain cancer and worked with Donna Culliver of the Adam’s Angels Ministry to make him the one day chief.
Hahn says Municipal Court Judge Julian Wiesler swore Traelon in to begin the day of some ‘real’ police work, including the arrest of a ‘felon’ during a traffic stop.

Traelan Nickerson gets comfortable at the police chief's desk.

Hahn said Traelan also made some purchasing decisions and cleared up some matters on Chief Phelps desk and attended meetings with the district attorney’s office and Sheriff Otto Hanak. Sheriff Hanak also recognized Traelan.
Traelan’s grandmother Marilyn took him to the police station for the exciting day.
Hahn says Traelan has become well known in Brenham and Washington County with his participation in the Adam’s Angels Dash for a Cure every October. 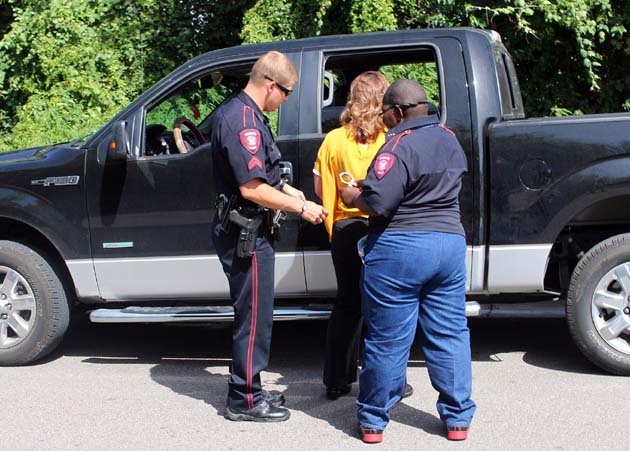 Traelan makes a 'felony bust' during a 'traffric stop' with Cpl Lance Weiss.

Traelan is one of the many childhood cancer suffers who benefits from the Ministry devoted to helping the children and families who have been afflicted with childhood cancer.