A Brenham police officer was honored at Brenham City Council Thursday for his efforts in saving the life of a citizen of Brenham. 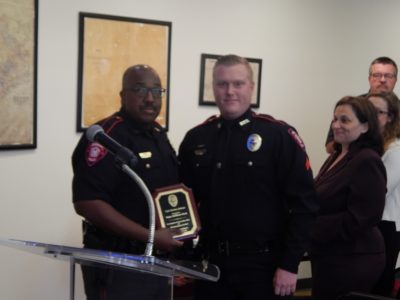 Corporal Kejan Mehlhorn received the Life Saving Award in recognition of his valor in the efforts that saved the life of a young man earlier this year.

Captain Lloyd Powell, who presented the award, said police received a call on January 10th that a man was feeling suicidal in the Hohlt Park area.

Officers immediately came to the park and began searching for the man, who Cpl. Mehlhorn found to be in the process of hanging himself. Cpt. Powell said Cpl. Mehlhorn got him down “with seconds to spare”.

Police were unsure if the man was going to make it, but medical responders were able to help him recover. According to Cpt. Powell, Washington County EMS officials say the man is healthy and “doing good”.  He attributed this to Mehlhorn’s “persistence and work”.

Cpt. Powell said the Life Saving Award is one of the most prestigious awards one can get in law enforcement. He said, while it can sometimes be a thankless job, it’s not always about someone saying “good job”, but rather knowing your efforts helped save a life. 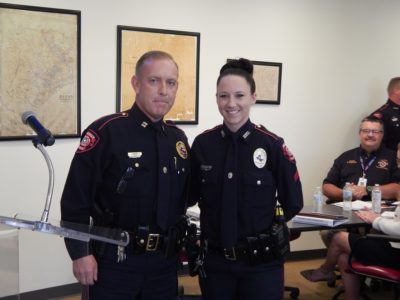 Captain Dant Lange said she frequently goes “above and beyond” for the students there, saying Cpl. Newell spends her own time and money taking care of kids whose families have fallen on hard times.

Cpl. Newell said it’s “a true privilege” to work for the City of Brenham, and she’d like to continue to “be here for a while”.