Charlie McCulloch and Eric McAlpine of Weisinger Inc., out of Willis, spoke to councilmembers about potential pricing options and lifespans of water wells. 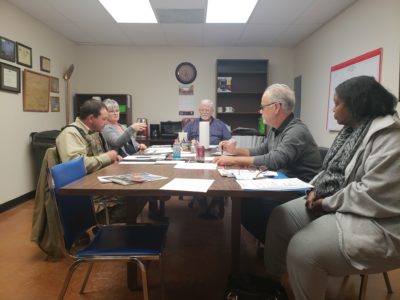 The two stated that tests done on the city’s water met the requirements of the Texas Commission on Environmental Quality.

Despite this, they labeled the water as “very corrosive”, supporting claims made by members of J&S Water Wells and Harkness Engineers, who met with councilmembers last month.

They said the process of beginning the well starts with doing a study, describing where it can be drilled, how deep it needs to be, what kind of water is available, and what other wells are in the area. The council would then need to file paperwork with the state, design and get approval for a well, and then begin drilling.

Based on Weisinger’s estimates, a 12-inch well would be budgeted around $650,000. Increases for upsizing the well, increased wall size, and stainless steel lining estimated about $30,000 for each addition.  They noted these numbers presented did not include costs for the study and filing paperwork.

Burton City Secretary Angela Weyand said the council is not expecting to meet with another firm next month, saying, “We’ve got the ideas we needed”. She says the city is still in the information-gathering process, and is not requesting bids.

In other items, councilmembers tabled an item dealing with repairs on the Knittel Lift Station pump, stating they wanted to look at available warranty options for repairs.

During Mayor David Zajicek’s report, he informed the council that TxDOT has begun work on the bridge connecting Texas and Burton Streets. TxDOT will replace the current bridge with a two-lane bridge, which Zajicek expects to be completed by March.

The council also approved an item to move its monthly meeting night to the second Tuesday of the month, beginning in January 2019.