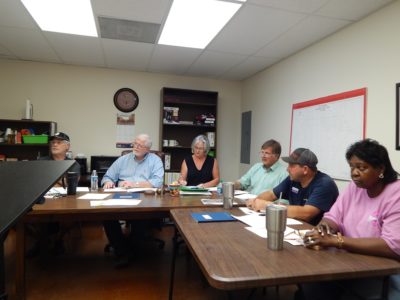 The Burton City Council at its meeting Tuesday moved to table action to further discuss a stance on the peacock population.

The decision from the council came after hearing from several citizens, who spoke both for and against having the birds freely roam the city. Additional chairs had to be brought into the council chambers to accommodate everyone who attended the meeting.

Some talked about the inconvenience of having the peacocks come close by their homes or businesses and the noise factor, while others said the city does benefit from having the birds as a tourism element.

Councilmember Jerry Martin said the city has people who really want the peacock population, and others who the peacocks are a nuisance to. He said there needs to be a way to keep them in the areas where they’re being fed.  However, several people admitted to feeding the peacocks at some point, and said the birds are basically stray dogs.

The council and the public both went over steps homeowners can take to keep the peacocks from entering their yards or other off-limit area. Some of the proposed ideas included setting up fencing, using moth ball barriers or predator urine.

City Attorney Aaron Kleinschmidt will present a new animal control ordinance to the city in October. City Secretary Angela Harrington said the ordinance will have more lengthy explanation on the city’s status as a bird sanctuary.

Harrington said the ordinance should go into more detail on protection for the birds, but also control methods and steps for the city to take, depending on if the birds become pests or cause irritation. She said the outcome may not make everybody happy.

One citizen said he does not think this is an issue of black and white, due to all the sides of the matter. He said this is not something that can be “animal controlled” off, but that there are things the town can collectively do to make things easier on everyone.

Also at Tuesday’s meeting, the council: