Several members of the Burton City Council took oaths of office during a short meeting Tuesday. 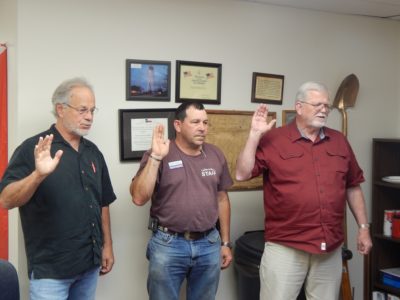 Zajicek thanked the community for supporting him and the council for the past two years, as well as the city’s employees and contracted workers for all the work they have done.

Zajicek said the city has seen much progress over the past two years, with the beginning of the city park, repairing and replacement of several water lines and meters, and the repaving of several streets.

Also during session, the council received a presentation from William Amelang during open forum. Amelang, with a group called Texas Roots, asked the council to consider accepting the Mayor’s Monarch Pledge, containing items to help stimulate the recovery of monarch butterflies.  After the presentation, Zajicek said the council would take it into consideration.