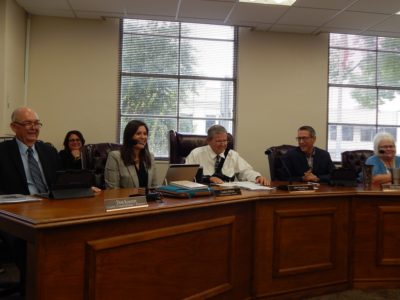 Representatives from Plains All American Pipeline announced Monday they are no longer considering the roughly 150 acres on Palestine Road in the Sandy Hill community, for a crude oil storage terminal. The company has given notice of its cancelation of the contract to purchase the property, which was originally set to close on Friday.

Commissioners were set to vote on a resolution opposing the development’s proposed location, but withdrew the item from the agenda given the company’s decision.

Martin said the company appreciates all of the feedback received, and looks forward to contributing and supporting local economic and philanthropic efforts along its project route. She offered contact information for anyone with additional questions or comments, at www.redoakpipeline.com or questions@redoakpipeline.com.

Commissioners Joy Fuchs and Don Koester both commended Red Oak Pipeline, who Plains is representing as a construction manager. Fuchs said Red Oak was “forthright” and showed “really good character” with this decision.  Commissioner Kirk Hanath thanked the community for acting respectfully towards the companies, and said they did a great job of organizing.

Resident Tom Bartley said he had come with a petition signed by over 60 other residents against the project’s proposed location, but said it was no longer necessary given the outcome. He thanked commissioners for their support and Plains for reconsidering the proposal.  He asked that, in the future, residents are notified of projects like these well in advance.

No word was given at the meeting if the developers will continue to look at other sites in the county.

Commissioners then adjourned into workshop session to discuss the county’s employee compensation plan.