The drug dog for the Fayette County Sheriff’s Office found cocaine with an estimated $2000 in street value in the battery of a Ford pickup truck Friday during a traffic stop on Interstate 10.  Three suspects from Laredo were arrested during the stop.

The drug dog ‘Lobos’ was called in because the several ‘criminal indicators’ the suspects were exhibiting. 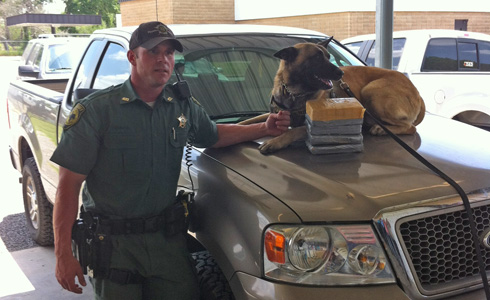 Narcotics Deputy Randy Thumann and the Drug Dog Lobos found $2000 worth of cocaine in a traffic stop.

Lobos searched the pickup truck and found the battery filled with 400 grams of cocaine.